Anyone who has made it to Day 8 on this particular blog will realize by now that I am a certified History Nut. (Really, I have a card in my wallet, and everything.) Touring Scotland and walking in the footsteps of legends – how can words describe what that meant to me? Each day brought with it the chance to retrace the adventures of the past, and to fall into the magical spells woven by history, headfirst.

So why, in my previous posts, do I keep making references to “over the sea to Skye”?

Recall for a moment our friend Prince Charles Edward Stuart, aka Bonnie Prince Charlie. (See my post for “Day 6”.)  After Culloden, things were not going so well for the Bonnie Prince. My writing abilities couldn’t do this story justice – trust me on this one – read on to learn the fate of the Prince:

The defeat of the Jacobite forces of Charles Edward Stuart, the Young Pretender, on the bleak battlefield of Culloden Moor on April 16th 1746 ended any hopes of restoring the Royal House of Stuart to the throne of Great Britain. After fleeing the battlefield, the prince spent five months, traveling mainly on foot, living rough in the wilds of Highland Scotland, evading the thousands of government troops taking part in the biggest manhunt the area has ever seen. Despite the £30,000 price on his head, no one betrayed him and he eventually fled back to France and obscurity. The legacy of his flight is a wealth of romantic songs and stories.

Charlie crossed to South Uist by boat in the dead of night and was taken to meet Flora Macdonald at her home at Milton. She agreed to assist him and with her he made his famous escape to Skye dressed as Betty Burke, her Irish maid. They landed at Vatternish Point where the Prince and Flora parted company never to meet again.

He and a companion then walked south to Portree, crossed to Raasay, where he spent the night in a crude hut because government troops had razed everything else. Finding no help he returned to Portree and walked south to Elgol to take a boat to Mallaig.

Flora MacDonald was arrested and imprisoned for her part in the Prince’s escape. After her release she married and emigrated to North Carolina where her husband and son ended up fighting for the British Government during the American Revolution. She was thrown out of her home when she refused to take an oath of allegiance to the North Carolina Congress and she and her husband returned to Scotland. She died on Skye in 1790.

Her last resting place is the small graveyard behind the Skye Museum of Island Life. From her Celtic cross memorial there is an excellent view across The Minch to her birthplace of Uist.

I mean seriously, dressed as her Irish maid Betty Burke? Could I make this kind of thing up?

Whether or not that actually happened, perception is belief, and Flora has gone down in the pages of history as the savior of the Bonnie Prince. 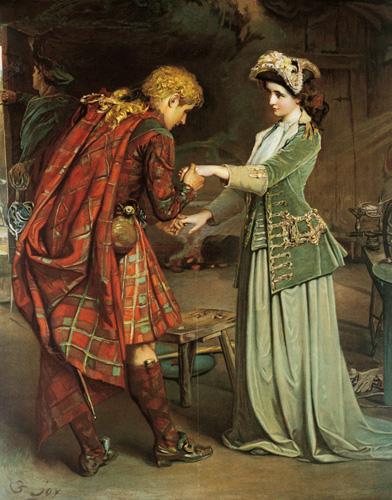 History has given us the tale in the form of the “Skye Boat Song”:

Speed bonnie boat like a bird on the wing
“Onward!” the sailors cry
Carry the lad that’s born to be king
Over the sea to Skye

Loud the winds howl
Loud the waves roar
Thunderclaps rend the air
Baffled, our foes
Stand by the shore
Follow they will not dare

Many’s the man
Fought on that day
Well the claymore could wield
When the night came
Silent they lay, Dead on Culloden field

Yes, it is a little on the dramatic side, but 1746 was a dramatic year for Scotland. She still hasn’t recovered, actually.

Fortunately for us, driving over the Skye Road Bridge, the only thing that was dramatic was the scenery. The island of Skye is one of the most beautiful places that I’ve ever had the good fortune to visit. You can see the sea from practically everywhere you turn, and there are rolling hills and mountains of every variety and personality. I think really, that’s what I love about it – the place has personality in bucket loads. There seems to be a different “feeling” everywhere you look, and the landscape is incredibly unlike anything that I’ve ever seen before. Here are some of our first impressions of that beautiful place:

(Did I mention the sheep? They rule the island of Skye. They were EVERYWHERE.) 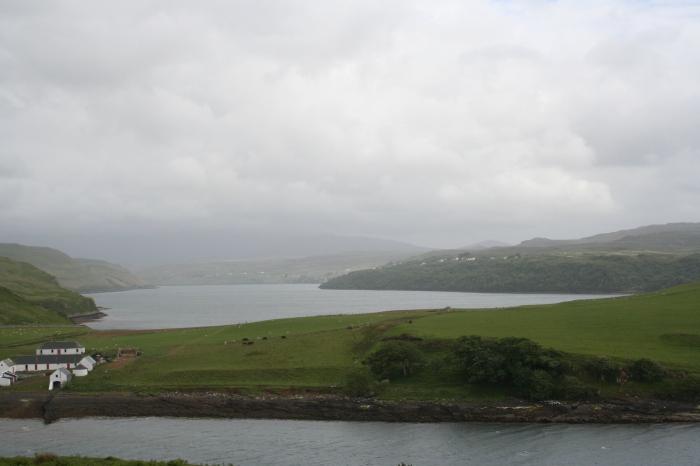 Our accommodations on Skye were on the northwestern coast. What this means, for those of you who are not geographically inclined, is that there was not much in the way of land standing between us, and Iceland. The feeling of being at the edge of the known world was intensified by the fact that the island itself is undeveloped and sparsely populated. The words “wild” and “remote” would begin to form a pretty accurate description of Skye.

But back to our accommodations. We were staying for the next two nights at the Ullinish Country Lodge, which has been in existence for well over 200 years. This fact amazes me, because I can’t imagine people out in this middle of nowhere wilderness, 200 years ago. What were they doing there? We were there to “get away from it all”, but what did people do here 200 years ago? Probably fighting each other, being Scots and all…

Ullinish is actually the name of the village, but it really wasn’t a village – there is one main road, and one little tricky side road, and just a few houses scattered along the romantic coastline. And the road really wasn’t a road – it was more of a “single car track” as they phrase it, which means that if a sheep or another car approaches, you need to pull over as best you can and let it pass – the track is only wide enough to accommodate ONE vehicle. (A small one.)

Like almost everywhere we went on Skye, we arrived at our destination with a little bit of concern that we were actually in the right place. It’s hard to describe, but on Skye, there is such a sense that you are the only person in existence on the planet, that when you finally see the place that you’re looking for, you marvel that you ever found it in the middle of this beautiful emptiness.

We were met in the reception area by Pam Howard, who, along with her husband Brian, runs the Lodge. With a friendly smile and a much needed offer of refreshments, she welcomed us to Skye and showed us to our room.

If we step back and look at things, you’ll see what I mean by beautiful emptiness:

As fate would have it, Glenn and I were booked in the Johnson room. The most celebrated historical visitor to the Ullinish Lodge was Dr. Samuel Johnson. Johnson was a British author and scholar, who, along with his sidekick James Boswell, journeyed to the “wild” north, later writing about his travels in the book, “A Journey to the Western Islands of Scotland”. I can’t help but comparing Johnson and Boswell to the Americans Lewis and Clark, given the wilderness of the Western Isles, and Scotland in general, at that time. For a British citizen to venture into the Highlands was no small feat in 1773, and a very brave one, in my opinion.

Johnson and Boswell were guests at the Lodge during the autumn of 1773. Their visit is recorded in their journal: “We got to Ullinish about six o’clock, and found a very good farm-house, of two stories…there is a plentiful garden at Ullinish (a great rarity in Sky)…”

The plaque on the wall in our room proclaimed that Dr. Johnson had indeed slept in that very room. He must not have had any bad experiences there, because we saw no sign of him (or Boswell) over the next two days.

We were booked for dinner that night at the Lodge. We had been assured beforehand by our friends at Clans and Castles that dinner at the Lodge was something special, and so we were anticipating great things. We met the other guests downstairs in the sitting room shortly before dinner, to enjoy cocktails and appetizers. Amazingly, for such a truly remote location, our dinner was incredible. The staff was attentive and extremely professional, and the food was superb right down to the showpiece dessert.  (This was an assortment of colorful sorbets, arranged on the plate like an artist’s paint palette. The whole dining room gave an audible sigh of appreciation, at that one.)

They had a great selection of whisky, by the way:

We took a bottle of wine up to our room after dinner, and settled in for the night. Day 8 had been quite a long day! It felt good to be cozy, and indoors, considering the whipping wind outside our windows and the remoteness of our location. Giving Bonnie Prince Charlie, Flora MacDonald and Dr. Johnson one final nod, I finally fell asleep, the characters from my beloved history swirling around me.

← Over the Sea to Skye
Exploring Skye →