Over the Sea to Skye

On Tuesday morning,  June 10th,  we checked out of the Bunchrew House and said our farewells to Peter, our faithful bartender and butler.  Before getting on the road for the day, we made sure to get down to the dining room in time for breakfast. Once again, our accommodations did not disappoint. What I really enjoyed about breakfast at Bunchrew was that the dining room overlooked the Beauly Firth. Don’t get me wrong – the food was excellent – but I particularly enjoyed looking at the scenery while I was eating my porridge.

The plan for today was to drive south on the A82, along Loch Ness, to the ruins of Urquhart Castle. From there we were going to take the A87 west, to Eilean Donan Castle, near the town of “Kyle of Lochalsh”. (I just really like saying that – as in, “Aye brother, I’m from Kyle of Lochalsh”.) After touring Eilean Donan, we were going to drive across the Skye Road Bridge, to, well, obviously, to the island of Skye.

And so we set out.  (The Ford Focus was holding up quite well, by the way, at this point in our trip, in spite of the abuse that we were heaping on the front left tire, each time we whomped into a curb along the highway, trying to avoid a tour bus, or a bicyclist, or a sheep.)

The day was cool enough for us to don our jackets, and for me to wear my hat. We drove south along Loch Ness. 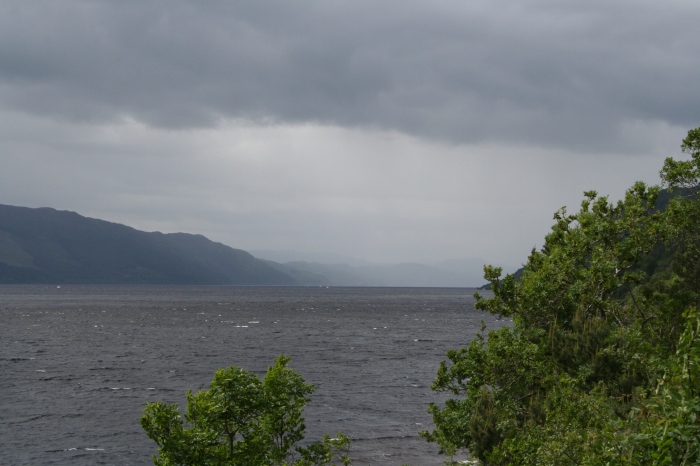 All of my life, I’ve heard of the famous Loch Ness, and to be cruising along next to it was pretty close to unbelievable. I kept scanning the surface for Nessie, but the best I could do was to run into her twin at the Nessie Gift Shop: 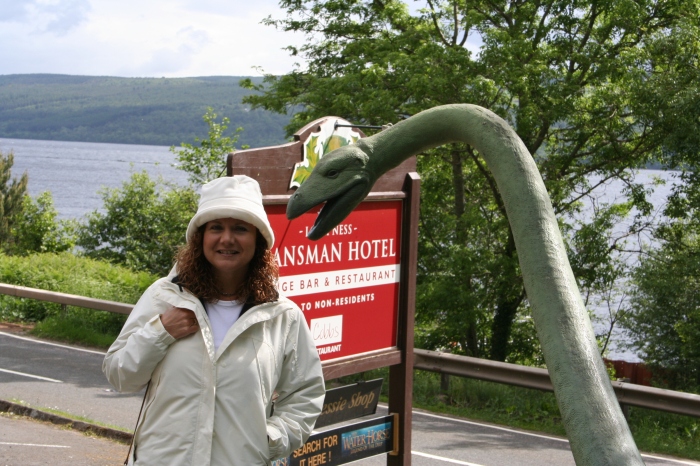 We found Castle Urquhart with no problem. We were moving in to what could be considered the more remote parts of Scotland, and once we got outside of Inverness, there was not much alongside the banks of Loch Ness aside from a couple of tourist shops, and the Castle.

The ruins of Castle Urquhart are situated on the banks of Loch Ness. Before coming to the ruins, we had to go through the visitor’s center. I was hoping to get through this quickly and get down to the ruins, but I ended up being pleasantly surprised. The visitor’s centered had a small auditorium that offered up a short movie on the history of the castle. We decided to stay and learn a little bit about the past of this impressive site. There is a great description of that story, here:   http://www.aboutscotland.co.uk/ness/urquhart.html
Suffice it to say, there was a lot of bloody fighting, and eventually one of the factions decided to blow the castle to smithereens, rather than to see it fall into the hands of their enemies. (That is true Highlander style, I might add.) The best part was the end of the movie – after describing to the audience the story of the destruction of the castle, a long, wide curtain was opened to reveal  the actual castle itself, outside the window of the auditorium. They get extra points for presentation, on that one.

This is what it looked like, when the curtains opened:

It was a bit of a walk from the center to the castle, but the ruins were amazing once we made it over to them.  The ruins, the loch, and the surrounding mountains, all combine to create one of those special places that you only encounter a few times in your walk on the planet Earth. It was similar in feeling to our response to Dunnottar Castle, on the eastern coast of Scotland. Otherworldly, and mystical, if you’ll excuse the word…

Also, at Urquhart, I think the faeries have arranged it so that it’s impossible to take a bad picture. (Click on an image for a larger view.) 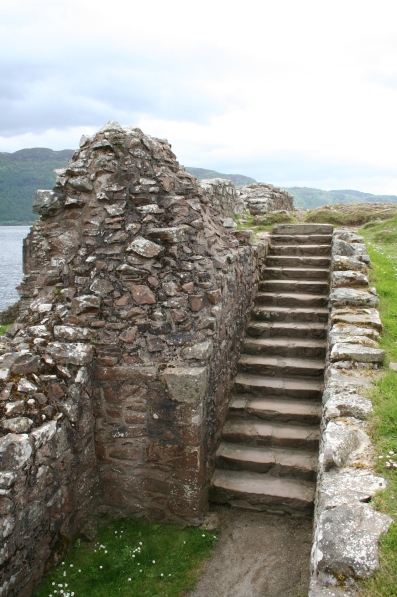 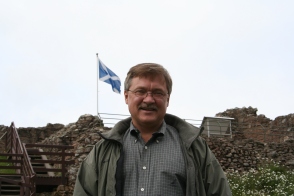 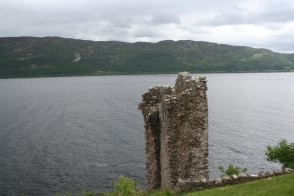 We left Loch Ness – with a little regret on my part – after all, when will I ever get to see Loch Ness again? – and we turned the Ford Focus to the west and headed into the Highlands. The scenery became more and more dramatic as we got farther and farther west. I began to feel like I was actually in one of the legends of history, and half-expected to see a band of marauding Highlanders come charging down one of the hills toward us. This feeling was intensified when I realized with a jolt that we were approaching the site of the Battle of Glenshiel.  Back in 1719, on this site, the Jacobites had clashed swords with the British (who else), and unfortunately didn’t fare too well in spite of the fact that they had the infamous Rob Roy MacGregor on their side.

Near Glenshiel: (Can you see the Highlanders?) 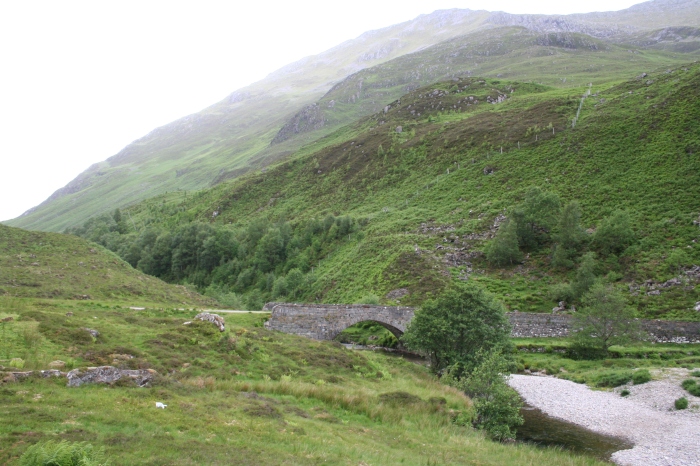 As we got deeper into the western Highlands, we began to see road signs in two languages, English, and Gaelic. Sometimes the English names were too hard to attempt, nevermind the Gaelic.

There was a light rain falling by the time we reached the Eilean Donan Castle. The castle is known for being the most photographed castle in Scotland, and knowing this ahead of time, I really had looked forward to seeing it in person, and taking some of my own pictures of the place. The movie “Highlander” was actually filmed at Eilean Donan. Standing there “live”, in the gentle rain, well…all I can say is, that like Scotland itself, Eilean Donan is magical. Perhaps after a week in Scotland I had come to believe in faeries and otherwordly beings; I don’t know…but standing there, in that valley, I wasn’t sure that I was in the 21st anymore.

See what I mean? 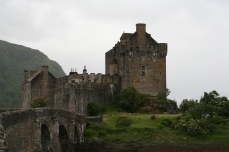 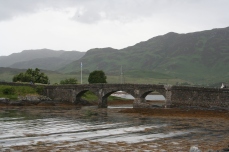 (Incidentally, if you happen to be interested in the history of the Eilean Donan castle, check out this site: http://www.eileandonancastle.com/visitor-information/history.htm )

The castle has an interesting story, as they all seem to, in Scotland. My favorite aspect of the story is that, like Castle Stuart, Eilean Donan lay in ruins for 200 years or so, until being rebuilt by a Scot with a mind for heritage, John Macrae-Gilstrap. Thanks John, you did a great job.

Again, we were not allowed to take pictures inside the castle, so we did our best with outside photographs in the rain. We didn’t mind the rain, because actually we felt that we’d been pretty fortunate up until this point, as far as the weather had been concerned.

I was loving every minute of it, but we had to leave the castle and get back on the highway. We had dinner reservations at our lodging for the night, the Ullinish Country Lodge on the island of Skye.

There are 2 ways for travelers to reach Skye. You can either take a ferry, or drive across from the Highlands onto the island via the Skye Bridge. Seeing as Glenn tends to get seasick, we opted for the bridge. Given the rain, I couldn’t get a decent picture of the bridge, but here’s one that I snagged from Wikipedia: