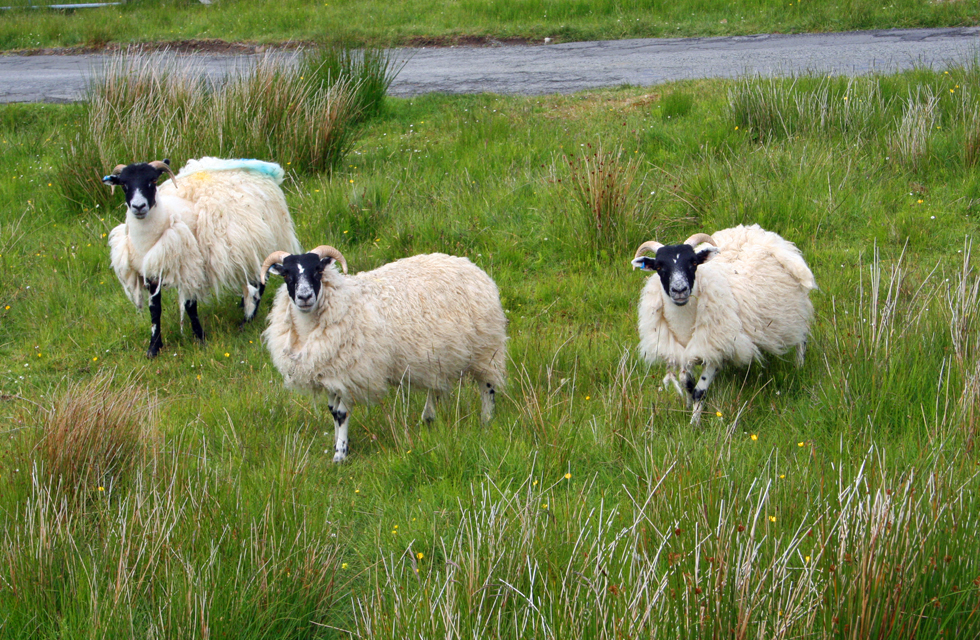 Wednesday, June 11th was devoted to exploring the beautiful island of Skye.
I’m posting a wee map of Skye here for you, so that you can get your bearings:

Our lodge was located in the village of Ullinish, which consisted of about 5 dwellings, admittedly with one under construction.

Our first destination on this day was Dunvegan Castle, just north of the village of Dunvegan, which was due north on the A863. After a hearty breakfast at the lodge, we set out.

By this time, we getting to be old hands at touring Scottish castles, but Dunvegan didn’t let us down in the “awe inspiring” department. Dunvegan, according to it’s website, “is the oldest continuously inhabited castle in Scotland and has been the stronghold of the Chiefs of MacLeod for nearly 800 years. Built on a rock, it has survived clan battles, the extremes of feast and famine and the profound social, political and economic changes through which the Western Highlands and Islands have passed.”

The MacLeod clan still hangs out there, as we learned.

Unfortunately we were not allowed to take photographs inside the castle. We enjoyed the antiques, artwork, and history of the castle, but my favorite bit of Dunvegan memorabilia was the Fairy Flag.

Here’s a condensed explanation of the Fairy Flag, from Wikipedia:

The Fairy Flag (in Scottish Gaelic, An Bratach Sith) is a fragment of cloth owned by the Clan MacLeod and preserved at Dunvegan Castle on the Isle of Skye in Scotland, where it is on display. The MacLeods consider it a magical artifact and family treasure.

Waving the Fairy Flag is said to provide salvation to the Clan MacLeod in the event of disaster, by summoning a fairy army. The flag has been waved twice, in the Middle Ages, but only one wave is left.

In the first waving, the MacLeods were greatly outnumbered in battle with the MacDonalds. At the exact point when the chief waved the Fairy Flag, the battle turned in favor of the MacLeods.

In the second waving, the clan’s cattle were dying of pestilence. To avoid starvation, the chief summoned the fairy armies, who magically restored the cattle to health.

The 28th Chief, Dame Flora MacLeod of MacLeod, offered to wave the Fairy Flag over the cliffs of Dover should the Germans look victorious. MacLeod fighter pilots were known to have carried pictures of the flag with them, and it is said that not one was shot down. Dame Flora is also remembered for cutting off pieces of the flag for soldiers during this time.

Many legends exist on the origins of the fairy flag. In one such story, the chieftain’s baby son was wrapped in the cloth by a fairy lady; in another, the chieftain took a fairy woman as a wife and she brought the cloth to the marriage, however she could only stay for seven years, after the seven years were gone she left, but she left the flag to protect her children; in a third, the banner was brought to Dunvegan by a MacLeod chieftain after years spent with the Sidhe.

A popular version of the legendary origin of the Fairy Flag is that there is truth in all of these stories: an early clan chieftan spent some time in the fairy realm. In his time there, he fell in love with the daughter of the fairy king, and they were married. Clan duty called, and he and his bride returned to the mortal realm. However, the fairy princess could only live in there for 7 years. Towards the end of this time, she gave birth to a baby boy, whom she tearfully left behind with the chief. Just before crossing over the fairy bridge back into her world, she begged that the baby never be left alone, as the sound of his crying would be too much for her to bear. That night, the clan had a feast, to distract the chief from his grief. As the MacLeods are famous for their piping and dancing, the nursemaid in charge of the baby sneaked away from the nursery to join the party. When she was discovered, the chief immediately ran up to his son, only to find his fairy wife already there, singing the child back to sleep. When the chief entered the room, the fairy vanished, but left behind a blanket on their son, which became the Fairy Flag. The song she was singing is still sung within the clan, known either as the Dunvegan Lullaby or the Fairy Lullaby.

We actually saw the remnants of the Fairy Flag, enshrined in a glass case at Dunvegan. It barely qualifies as cloth, at this point, which I really hate to say lest I anger the Fairies.

Dunvegan castle is situated on the banks of Loch Dunvegan, which I found to be quite beautiful.

From Dunvegan, the next stop was the northern tip of Skye, to the Kilmuir Graveyard, to visit the Flora MacDonald monument there. (See my previous post for an explanation of Flora’s hijinx with Bonnie Prince Charlie.)

Believe me when I say that this drive, from Dunvegan to Kilmuir, was one of the most beautiful experiences that I’ve ever had. I know I say that a lot about Scotland, and I’m still trying to figure out why this land allures me so much. I was describing it to Glenn as “being homesick for a place you’ve never been before”. I feel like I belong in Scotland. I won’t go so far as to say that I’ve lived there in another life, but I certainly feel a bond with this land.

The highway to Kilmuir runs mostly parallel to the sea. Consider this – the Isle of Lewis lies north of Skye, but after that, my friend, the next stop is Iceland. Iceland. Yep, we were about as “north” as I’d ever been before. 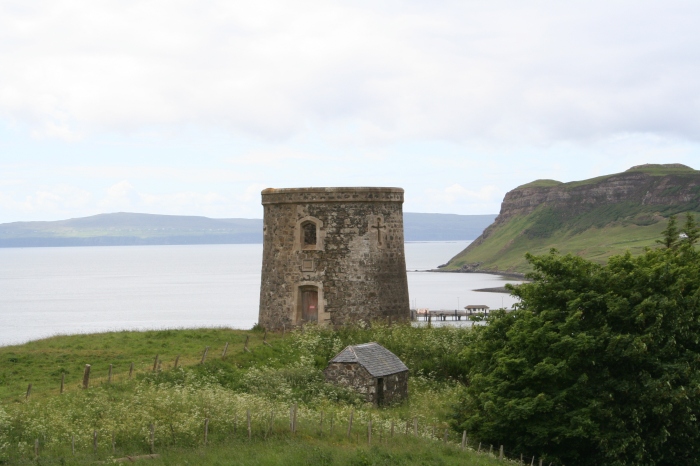 The photo above is a great example of “single track road” typical of the Highlands. I took this picture from the front passenger seat of our car (on the left side, if you remember), and the car pictured on the road ahead is driving toward us. The pullout areas on the sides of the road are where you bail if you lose in the Scottish version of the game “chicken”. Technically I think that drivers are supposed to exercise courtesy and safety, and most do, but we found the whole system to be slightly unsettling. 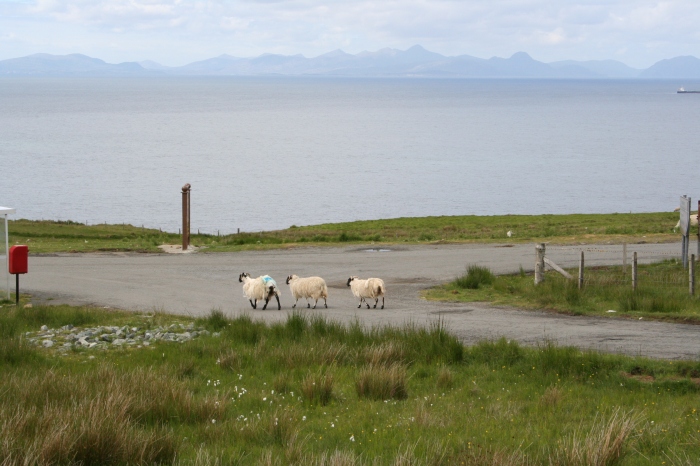 We loved these three sheep. We encountered them on the road that turns off toward the Kilmuir graveyard, and we followed them around for a while as they moseyed along. At one point they wandered into a covered bus stop area, which we found pretty funny. Three sheep, waiting for the bus.

Eventually we arrived at Flora’s resting place. There’s something about the Kilmuir graveyard; the ancient stones, set against the sea and the mountains give it a distinctly otherworldly air; one almost does believe in fairies here.

Grudgingly we left Kilmuir and headed towards Portree. We weren’t going to have much time to spend there, because we had dinner booked for that evening at the “Three Chimneys” restaurant, but I wanted to at least see what Portree looked like.

I took so many beautiful pictures between Flora’s grave and Portree that I can’t post them all here, but I have them on Flickr and YouTube.

Here are a few of my favorites: 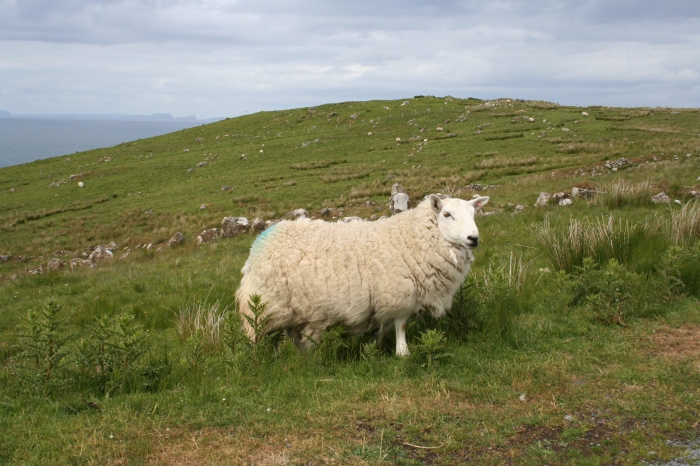 I love that last one. A phone booth in The Middle of Nowhere, Skye? Really?

I actually enlarged it and hung it up in my office.

So we made it back to our lodge in plenty of time to freshen up and head to dinner at the Three Chimneys. This renown gourmet restaurant was located north and a bit east of our lodge, about 30 minutes up the road. We didn’t really expect to have much trouble finding it.

But, my mother always taught me to plan for the unexpected, and in this case, I’m glad that she did. We didn’t get lost, exactly, it’s just that we weren’t sure that we were NOT lost, if that makes any sense.

I’m hoping that from my photos you can get a feel for just how much the word “remote” came into play, on the island of Skye. The road from Ullinish to the restaurant was pretty much single-track all the way, and closer we got to where we thought the restaurant was, the more sheep we seemed to encounter. It seemed that we were lost in some kind of sheep heaven. They were in the fields, and covered the road for as far as we could see. It was like being at one of those self-drive-safari attractions, only with sheep instead of lions and giraffes. We were getting a little worried, but every so often we would encounter a small sign for the restaurant, assuring us that it was just ahead, so we persevered.

Here a few pictures of the neighborhood:

Stunning, beautiful, gorgeous, spectacular, inspirational – yes, all of the above. In retrospect, it’s the kind of place that you really don’t mind being lost in.

Happily, we did find the restaurant. 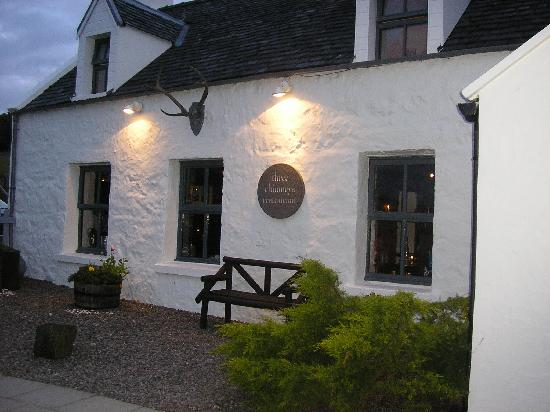 Now it’s hard to believe, given the location, but the Three Chimneys gave us one of the most memorable dining experiences that we’ve ever had. Glenn and I were celebrating our 10 year wedding anniversary, and we couldn’t have chosen a better spot, period.

The location, the quaint old farmhouse, and the superb gourmet food all combined to make this a night to remember. I had my first lobster dinner, and Glenn had BEEF – hard to eat lamb, in these parts, and not feel a tad guilty about it.

But my story about the Three Chimneys would not be complete if I didn’t mention in passing the painting that happened to be hanging on the wall next to our private little table for two.

For the entire trip, Glenn and I had been searching for any information or items concerning the MacPhee clan. Glenn’s family, the Fee family, are the present day descendants of the doomed MacPhees, who were annhilated in the 1600’s, and who more or less faded into oblivion. Try as we might, we couldn’t find more than a scrap or two of tidbits related to the MacPhees. So there we were, dining in the remotest part of Scotland, celebrating our 10 year anniversary, and I happened to glance up at the painting on the wall next to our table.

The artist was Marion MacPhee.

I guess you could call that serendipity.

Or some sort of sign, maybe, that were supposed to be here, in this place, celebrating 10 years together.

You might call me crazy, but that’s okay. We drank a toast – to love, to Scotland, to Skye, and to the Clan MacPhee.

So here’s my toast – Sláinte Mhath – or good health, to anyone who is reading this!