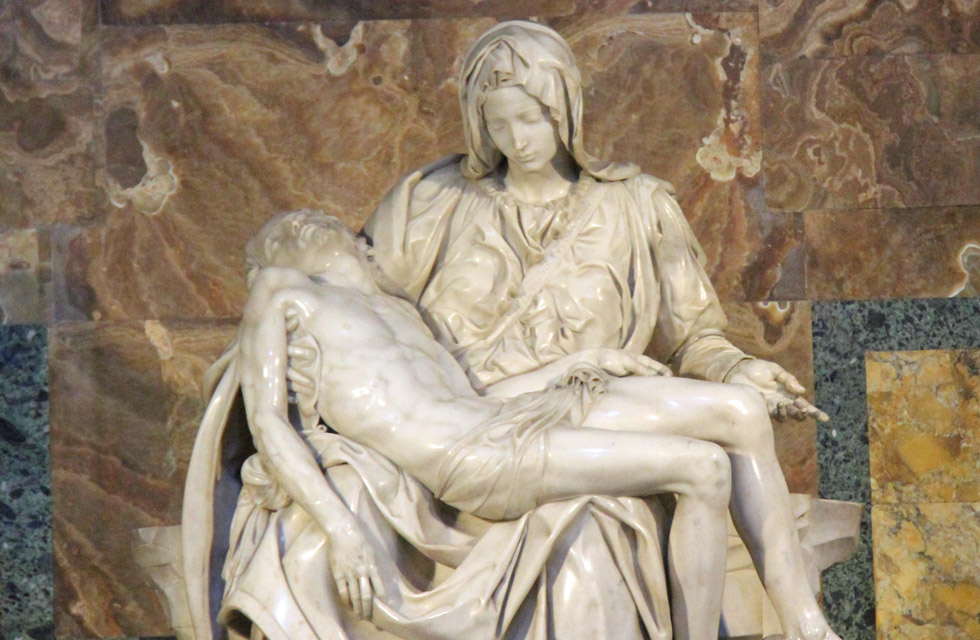 Tuesday, October 1st dawned a bit too soon for me. I’ll admit it, we had a little too much wine the night before, and it was very difficult to get up early. But we had no choice; today we had to be at the Vatican at 9:00 AM for a three hour tour. (Why are they always “three” hours?)

Finally on our third day in Rome we had figured out that the taxi stand was right next to the Pantheon, directly across the piazza from our hotel. After breakfast and COFFEE, we grabbed a taxi and headed for Vatican City, a separate country within the city of Rome. We arrived at the tour office across the street from the Vatican tourist entrance, and waited for the rest of group and our guide to arrive. Our guide was a very knowledgable man who was well acquainted with not only the Vatican, but also Rome in general. We saw him several times over the next couple of days giving tours to different groups in other parts of the city.

When everyone arrived we were ready to go. There were about 20 people in our group, of all ages and from all over the world. All of them spoke English. Our guide led us across the street and we waited in a long line that snaked around the outside of the ticket office. The buildings that make up the Vatican are spread out over 110 acres, and contain some of the world’s most famous paintings and sculptures. I was eager to see the Sistine Chapel, and St. Peter’s Basilica. 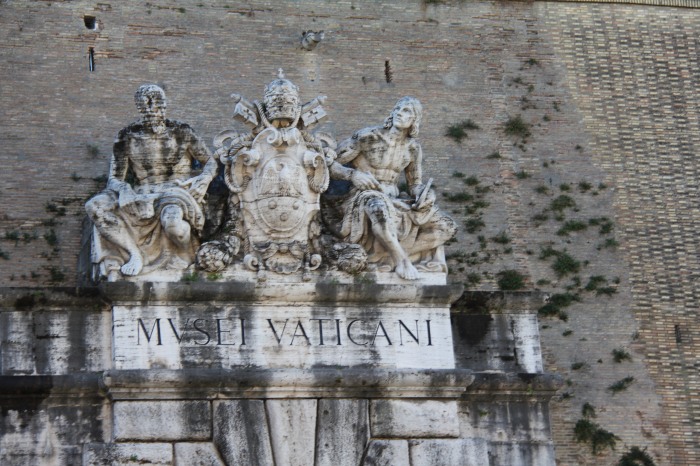 For most of the next three hours we were lead from building to building, and saw many wonders. Most of them I could admire as beautiful, but to be honest with you I am not really a great student of art. I know it’s a shame to admit, but it’s true. I’m glad that there are people in this world who can stand in front of a painting for hours, but I was just not gifted with that kind of appreciation for art. (Although we did circle around Michelangelo’s “David” statue in Florence for at least an hour.)

I enjoyed the architecture of the various buildings: 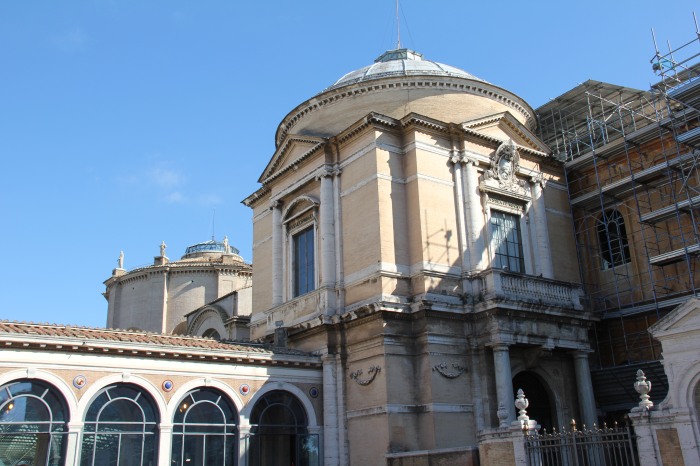 And the view of the dome of St. Peter’s Basilica from the gardens:

And the views of Rome from some of the windows were spectacular. If you look really hard on the edge of the horizon, in the center, you can see the dome of the Pantheon! (But you’ll have to click on the photo to enlarge it.

There were some very odd-looking pieces of art:

But there were many, many achingly beautiful ones: 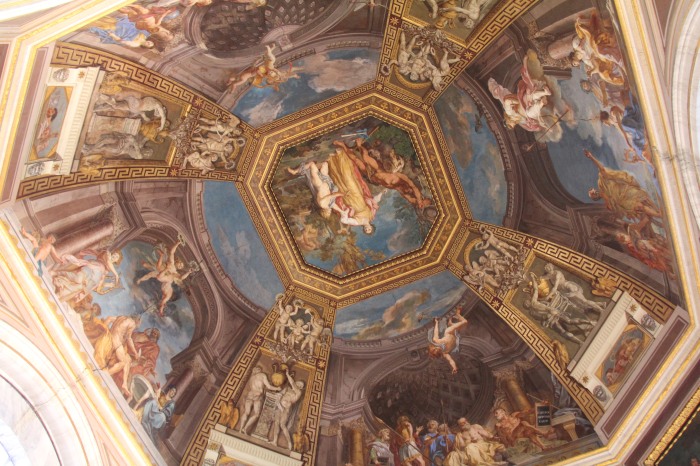 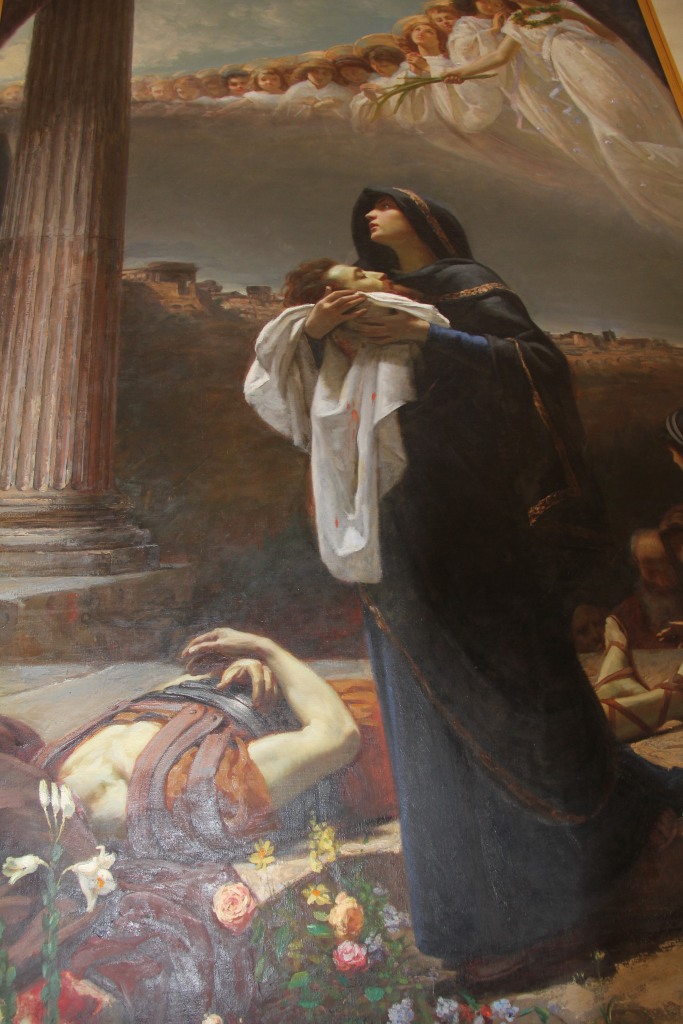 The closer we got to the Sistine Chapel, the more crowded it became. And hot. It was surprising to me that in a place with so much priceless art, that there wasn’t better climate control. It was almost unbearable. At some point, as we were walking down a staircase, in the jostling of the crowd I accidentally missed a step and did something terrible to my back. Two days hence, on a train to Florence, I would pay a price for this clumsiness. Eventually we were herded into the tapestry hallway, where we were jammed in like sardines. As I was pushed and shoved like a pinball, I wondered a few times if this crowd was within the fire code limits, and what, in fact, would happen to us all if there *was* a fire. If you’re claustrophobic at all, you might want to avoid the Vatican.

We somehow made it through the heat and mass of bodies to the Sistine Chapel. Once inside, cameras were strictly forbidden. A few foolish souls attempted to take a photo or two on the sly, but the Vatican security guards were on the watch, and made sure that any pictures that were taken were promptly deleted. The Chapel was gorgeous and truly a wonder to behold, but due to the uncomfortable crowd and the guards – who were constantly barking at us to keep moving – I felt that I couldn’t really enjoy it. Still, I was glad to have been there even for a glimpse. I wonder if there is ever a time when it’s *not* crowded there?

The final stop on the tour was St. Peter’s Basilica, not just a church, but one of the holiest Roman Catholic sites. Tradition, and more recent evidence, holds that St. Peter’s tomb is directly below the alter inside the basilica. That in and of itself would be amazing enough. But the sheer amount of treasure and wealth on display inside of St. Peter’s is mind-boggling. I couldn’t process it all. Everywhere I looked there was gold, marble, and other works of opulent splendor. (And oddly enough, Charles Edward Stuart, the Bonnie Prince Charlie of Scotland, is entombed there as well, having been granted asylum by the pope of his time.)

I read an article once that said that the wealth of the Roman Catholic Church is impossible to calculate. The Catholic Church puts a value, in Euros, of 1.00 on all of the Vatican buildings and the objects that they contain; the purpose of this is to indicate that they are priceless. Just looking at St. Peter’s alone, I could easily believe that.

It was fun to see the Swiss Guard: 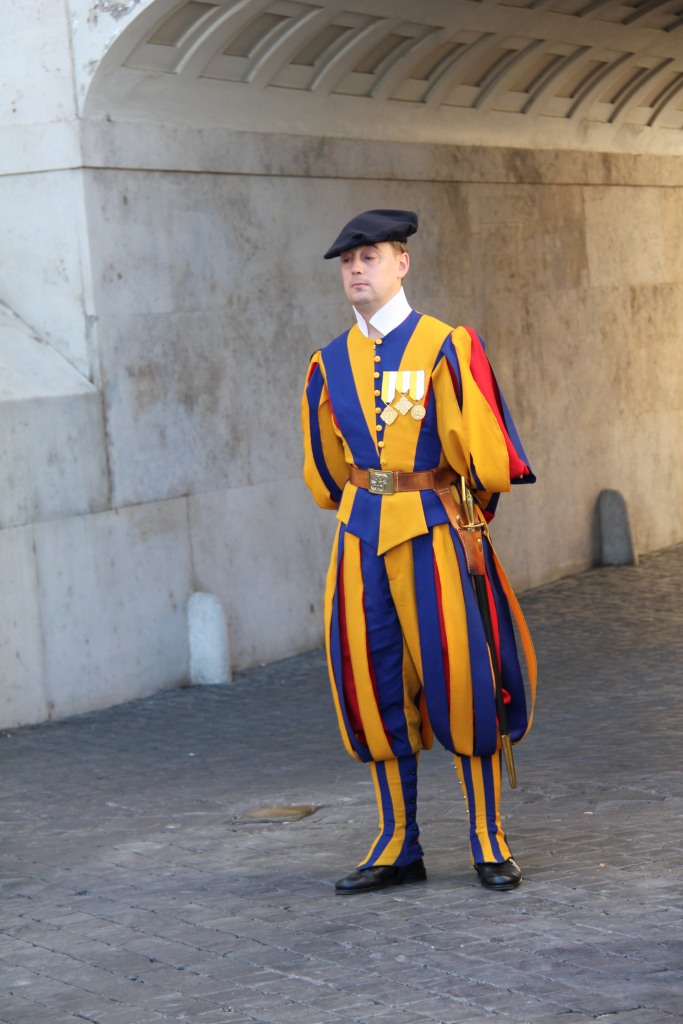 We left the Vatican and went back to our hotel.

By this time we were ready for a nap. We woke up refreshed and decided to explore the area around our hotel a little bit more, but in a different direction. We were falling more and more in love with Rome. Around every corner were sights like this… 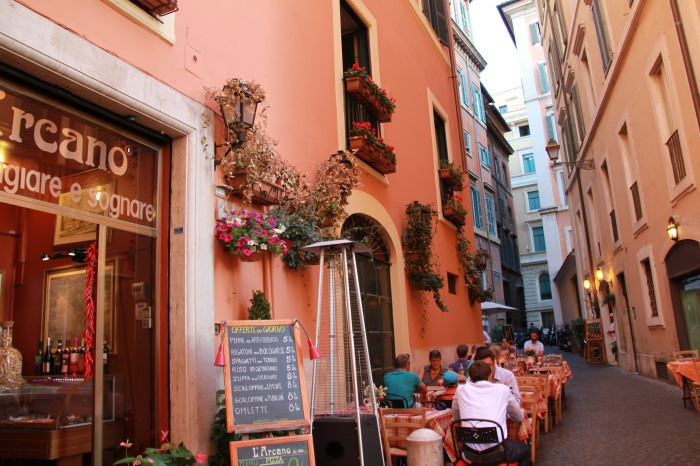 And here was Pinnochio again: 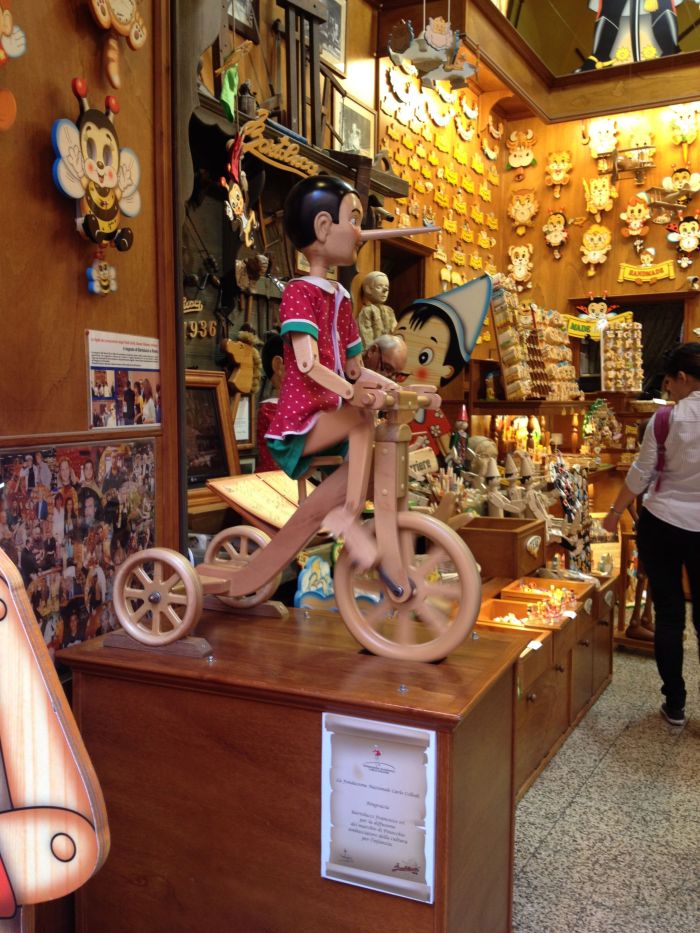 We found a Lindt chocolate shop with hand-sized truffles. Glenn was in heaven. 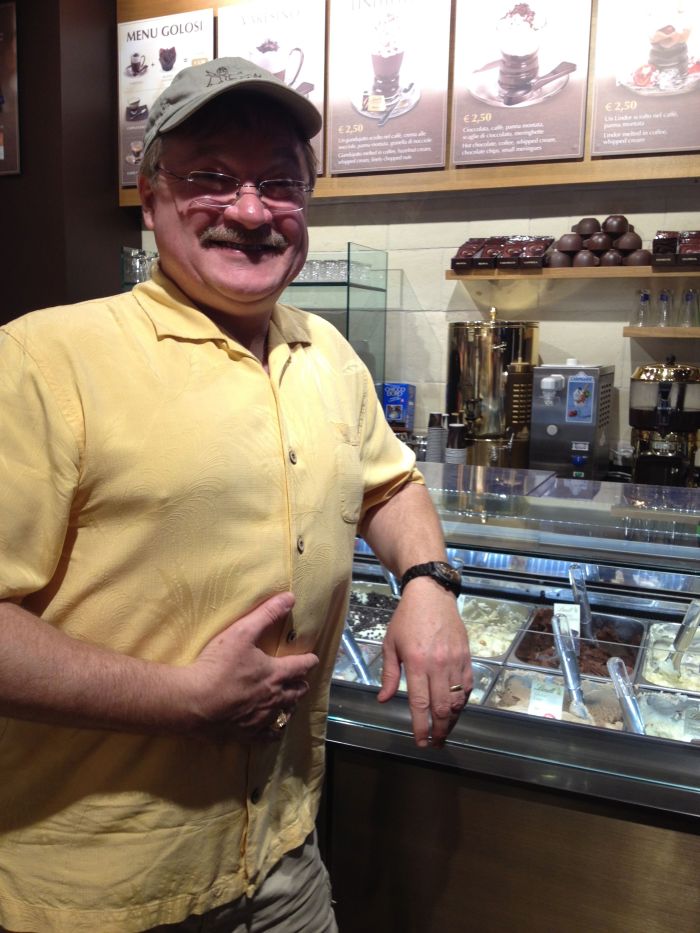 We had a final glass of wine at what had become our favorite restaurant on our piazza, called “Di Claudia”.

This guy had become our favorite street musician:

The guy prowling around in the background was the maitre ‘d at Da Claudia, whose name was Tomassini. We came to befriend him, although there was a bit of a language barrier. He told us that he has five daughters.

Day Three had been interesting and exhausting. Tomorrow would be our final full day in Rome.