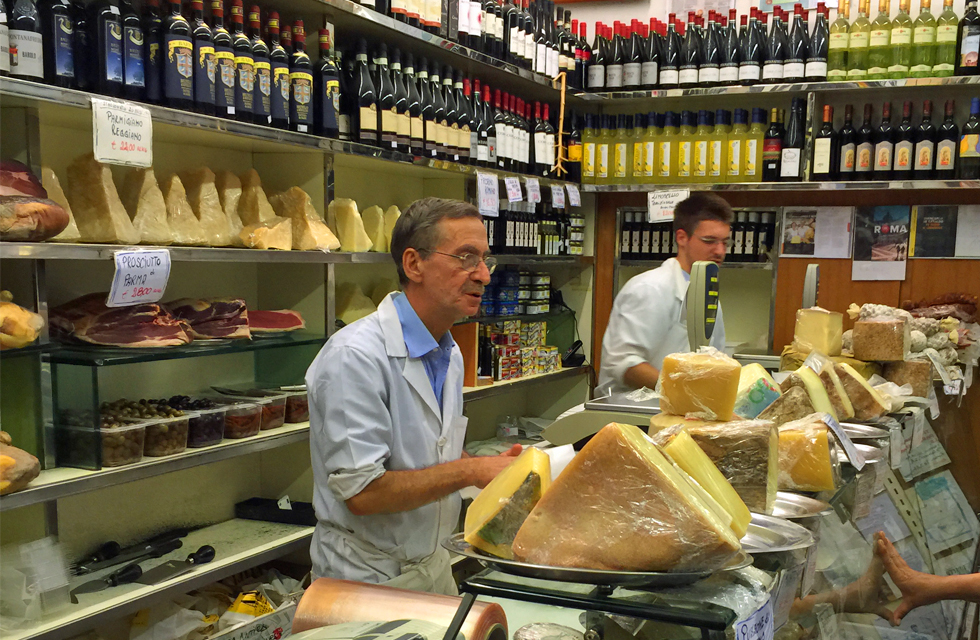 And no, there weren’t any vampires present…

Due south of the Vatican and of Rome’s city center, just across the Tiber River, is the Trastevere neighborhood in Rome. (Trastevere literally means “beyond the Tiber”.) We had a brief opportunity to visit this area on our last trip, and I very much wanted to experience more of it. It has the reputation of being a part of town that is much less crowded with tourists, but is every bit as charming as the more popular city spots, and being a neighborhood where the people of Roman actually live, work, and eat. What better way to get to know this area than to book a four hour walking and eating tour?

According to the glossy brochure provided to us by Eating Italy Food Tours, “a neighborhood like no other, Trastevere’s ivy-coated, cobblestone streets come alive at night, earning it comparisons to Greenwich Village and Paris’ Left Bank. This is where Romans choose to eat with their families and where young Romans go for nightlife. This old quartiere features some of Rome’s best loved foodie places, run by the same local families for generations.”  We intended to put this to the test on the evening of September 21, 2015. 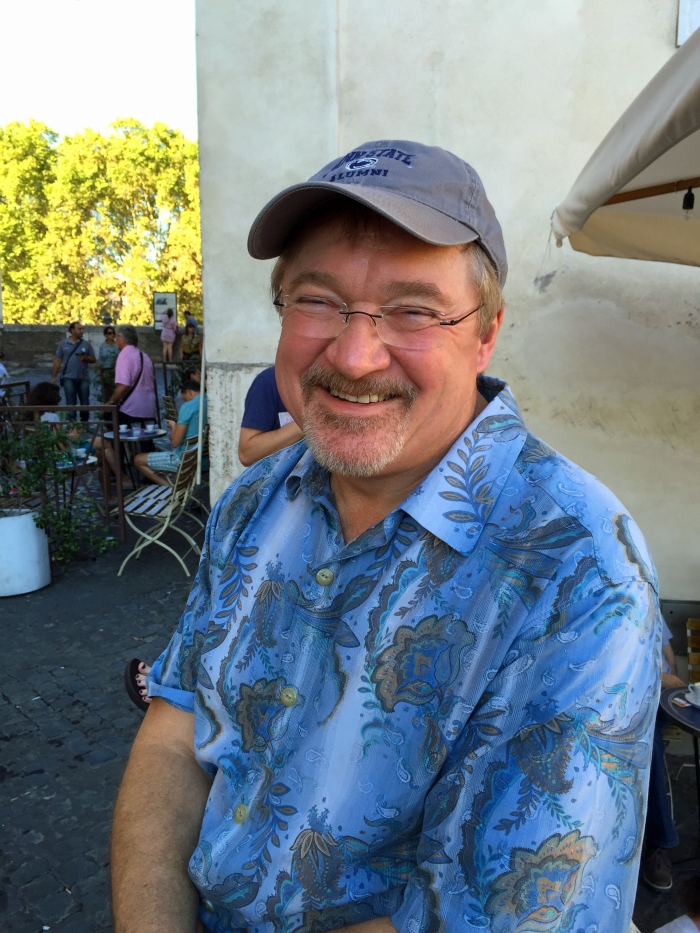 Our meeting point for the tour was Isola Tiberina, or Tiber Island, which you can see in the map above, nestled in the bend of the river. Specifically, we were to meet just outside the Basilica of St. Bartholomew. Sure, it looked like “just another church”, but this was Rome, and every brick has a story.

The basilica was founded at the end of the 10th century by Otto III, Holy Roman Emperor. It contains “relics” of St. Bartholomew the Apostle, and is located on the site of the former temple of Aesculapius, the Greek god of medicine, healing, rejuvenation, and physicians. Otto had cleansed the island of its former ill-repute among the Romans, and established its reputation as a hospital, continued under Christian guidance today. Francesco Pasqualotto, our tour guide, told us that he was in fact born at the hospital on Tiber Island. 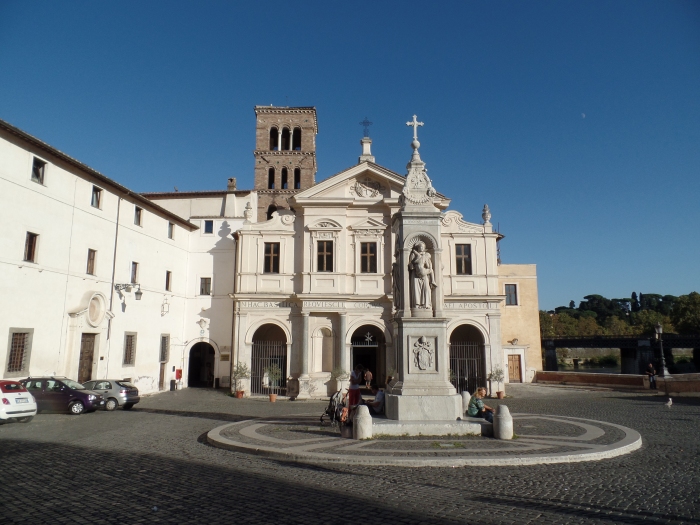 Our first stop was a local trattoria, “Da Enzo Al 29”. It was a quick stop; Francesco gave us a briefing on what we could expect on the tour, and we toasted to the beautiful evening with some sparkling wine. 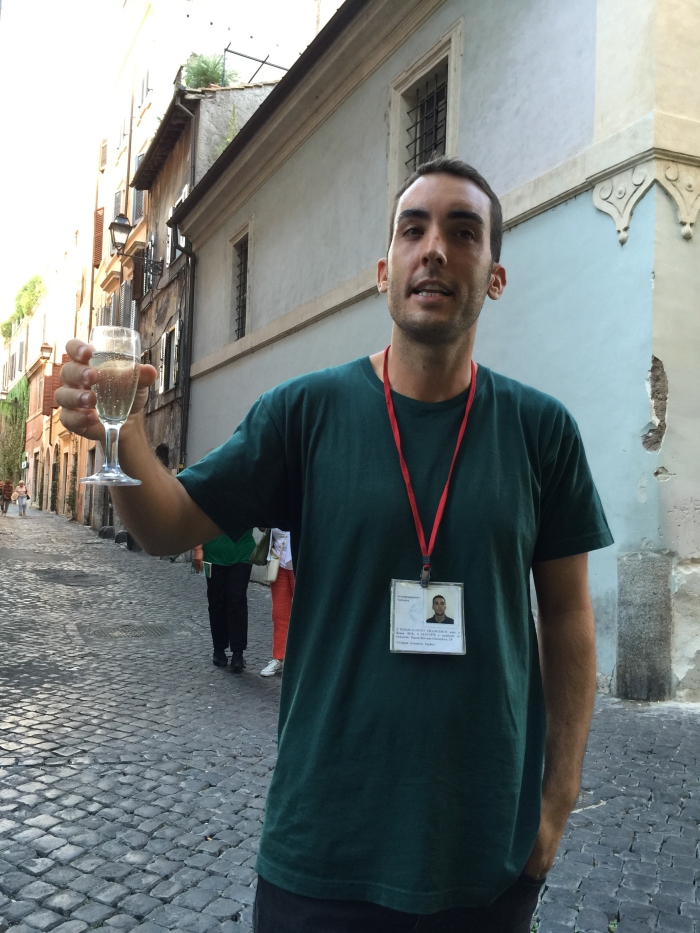 The next stop was a really special place, worthy of its own blog post, really. We stopped briefly outside of “Spirito Di Vino” as Francesco gave us the story of this fascinating restaurant. 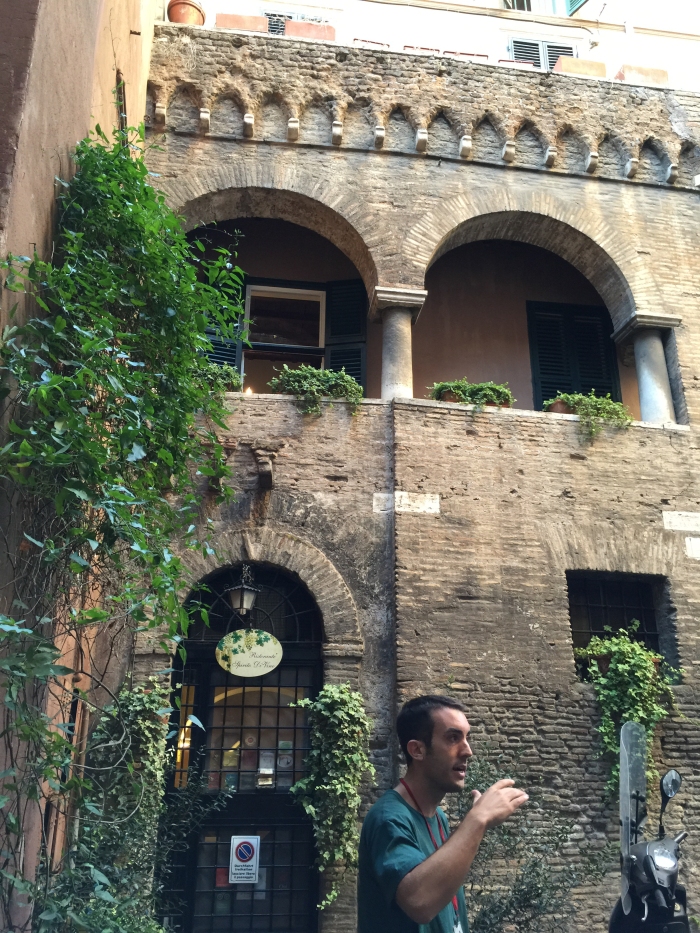 First of all, the food. The restaurant is family owned and operated, and was one of the leaders of the Slow Food movement. We had never heard of this before, not being very food savvy. It all started in Rome back in 1986, when a group of local restaurant owners were protesting the opening of a McDonald’s near the Spanish Steps. According to Wikipedia, Slow Food “at its heart is the aim to promote local foods and traditional gastronomy and food production. Conversely this means an opposition to fast food, industrial food production and globalization.” A certified Slow Food restaurant, this place regularly shows up on the list of the top 10 restaurants in Rome, no small feat considering the competition of over 6,000 restaurants.

For me, the real treat was the wine cellar, and the story behind the actual structure. The building is actually what remains of a synagogue that was built in the 12th century. (I would call in “ancient” but the term doesn’t mean all that much in Rome.) According to Francesco there are still Hebrew inscriptions visible on some of the columns. But digging deeper into both the earth, and time itself, at some point in the restaurant’s history, as the owners were excavating for a bigger basement, they unearthed several ancient sculptures which are today residing in the Vatican and Capitoline museums.

We went into the wine cellar, and sampled several wines. I sat quietly and let the ghostly feel of the place settle over me. 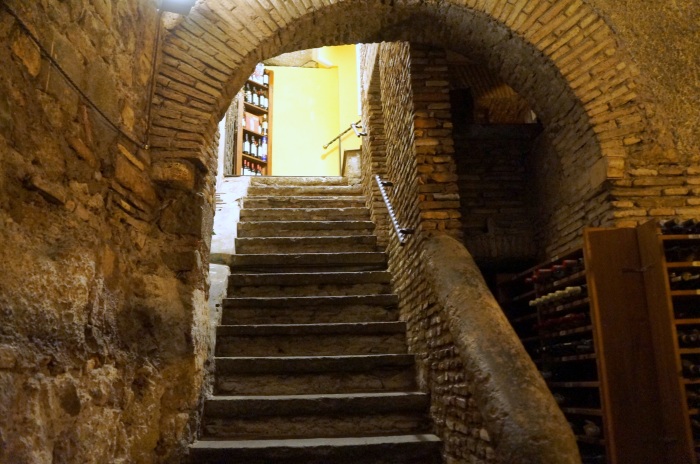 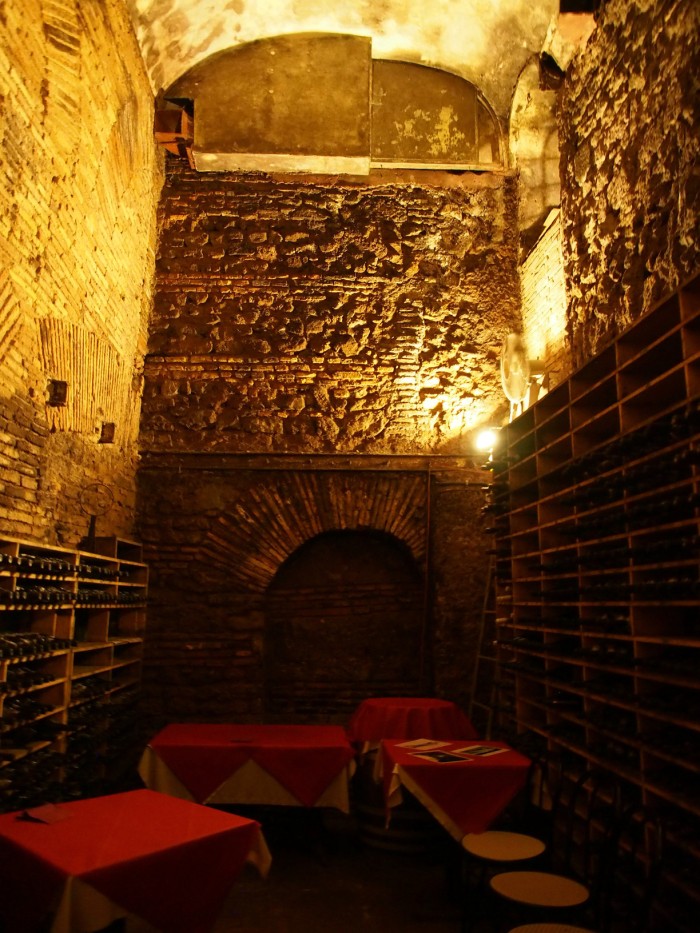 Leaving the eerie wine cellar behind, we made our way to stop #3, the “Innocenti” cookie establishment. According to our guide, the Innocenti family has been making biscotti and other assorted varieties of cookies in Trastevere since 1920. Yep, they were delicious. 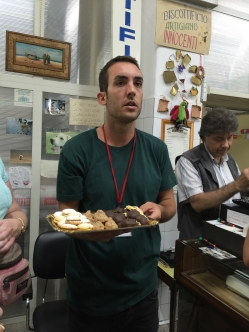 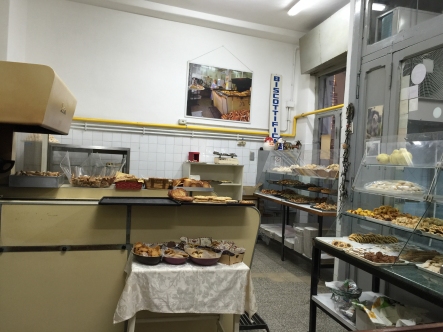 Stop #4 was not Glenn’s favorite, but I enjoyed it a lot. We visited “Antica Caciara”, a shop that specialized in cheese. As Francesco described to us the intricacies of cheese-making, he passed around samples of the very strong local pecorino cheese. While Glenn actually loved this particular cheese melted over thick pasta, eating it “straight” was not something that he was interested in. He kept handing his samples to me when Francesco wasn’t looking. 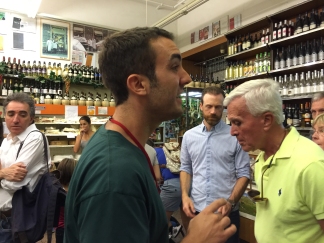 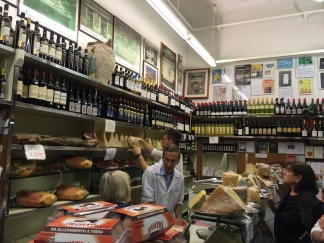 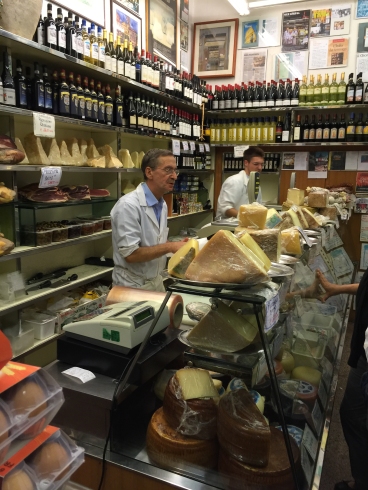 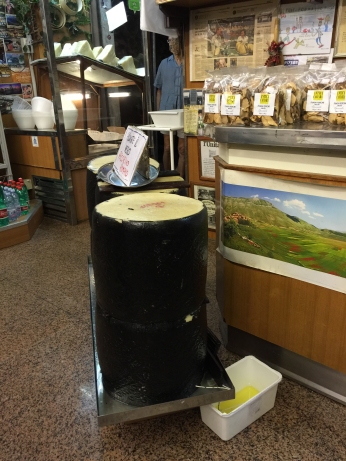 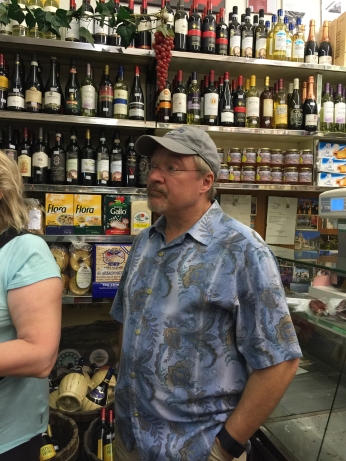 Our 5th stop was to “La Norcineria”, a specialty meat shop. By this time all of the flavors were competing in my head, and my stomach. We were served some really delicious meat samples, but I honestly can’t remember exactly what they were. I think it was prosciutto. 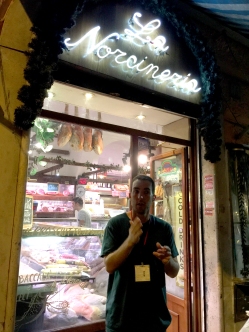 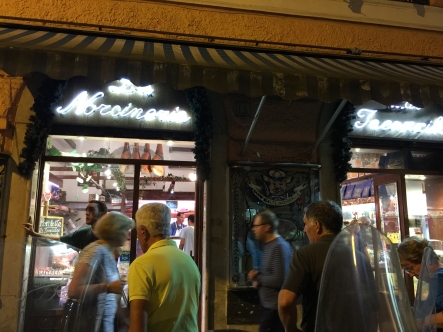 Stop #6 was to sample a bit of Rome’s favorite street-food snack, the suppli. It’s basically what my Italian grandmother would have done with some leftover rice and a bit of sauce: fry it until it’s golden brown, and enjoy. 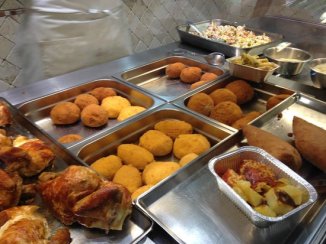 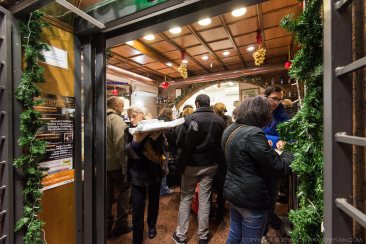 The suppli was actually pretty tasty, but at this point I was beginning to get seriously concerned; we had made six stops and still hadn’t come to the main dinner part of the tour. Could I really eat any more food?

The answer, as it turns out, was yes. Our 7th stop was to actually sit down and eat, and of course enjoy some more wine. We made our way past the church of Santa Cecilia (which I would have loved to have spent some time in), and found ourselves at “Enoteca Ferrara”, a great restaurant run by the two sisters, Lina and Maria. We enjoyed a delicious dinner of gnocchi, ravioli, and risotto. 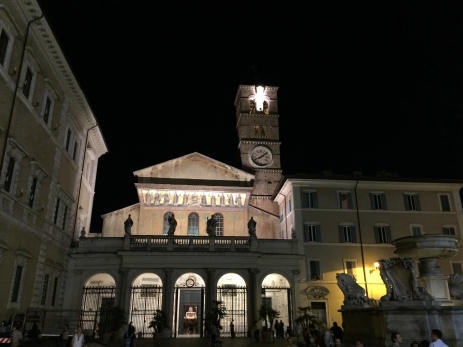 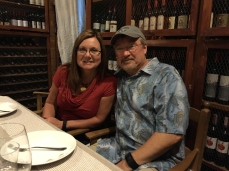 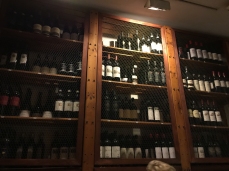 But wait, there’s more! No Italian meal is truly complete without the gelato. Francesco brought us to our 8th and final stop, “Fatamorgana”, where he explained to us what makes great gelato, and how to expertly spot the fake stuff from the good stuff. (Bright colors and distracting fruit = lousy gelato.) We each got to pick TWO flavors. As if we had any room left…somehow we managed. I think I had the “basil walnuts and honey” and the  pistachio, but honestly, who can remember? 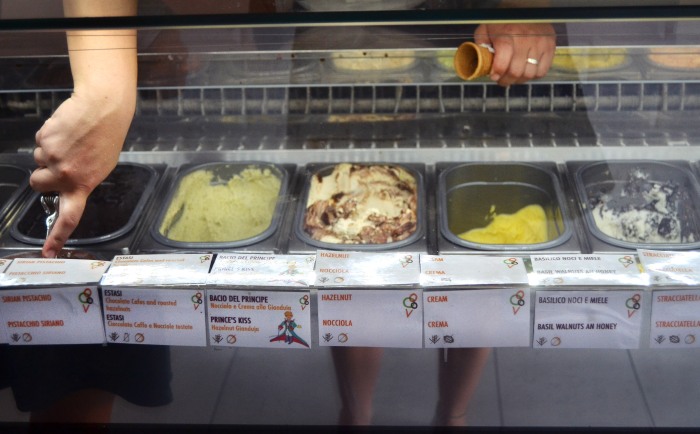 And thus ended our food tour, somewhere close to 10:30 pm. We certainly got our money’s worth. We thoroughly enjoyed the experience of walking the streets of Trastevere with a local, and getting the opportunity to sample some of the cuisine and learn about the history of the neighborhood. As the evening wore on and the restaurants began to fill up, the streets became alive and the atmosphere was vibrant and lively. I would love to go back and spend still more time in Trastevere. Like the rest of Rome, I think that it takes time to truly uncover all of the layers there.

If you’re ever in Rome and want to enjoy this experience, go to the Eating Italy Food Tours website, and book a trip. You won’t be disappointed. Ask for Francesco.