After our tour of Jerash, we ate lunch at a restaurant that had two things: an incredible buffet, and amazing pita bread. I had to chuckle as I watched the bread being made using an ancient time-honored process – by a guy on his cell phone 🙂

We drove past Amman on our way to our next destination; I was impressed at the size of the city, and the modern skyscrapers.

Our next stop was Mt. Nebo, the traditional site of the death of Moses:

Then Moses went up from the plains of Moab to Mount Nebo, to the top of Pisgah, which is opposite Jericho. And the Lord showed him all the land, Gilead as far as Dan, all Naphtali, the land of Ephraim and Manasseh, all the land of Judah as far as the western sea, the Negeb, and the Plain, that is, the Valley of Jericho the city of palm trees, as far as Zoar. And the Lord said to him, “This is the land of which I swore to Abraham, to Isaac, and to Jacob, ‘I will give it to your offspring.’ I have let you see it with your eyes, but you shall not go over there.” So Moses the servant of the Lord died there in the land of Moab, according to the word of the Lord,and He buried him in the valley in the land of Moab opposite Beth-peor; but no one knows the place of his burial to this day.   (Deuteronomy 34:1-6)

I’ve always felt a lot of sympathy towards Moses; he put up with an awful lot of whining for forty years, and then gets turned away at the gate. I know, God had His reasons, but still, I sympathize.

The view from Mt. Nebo was a bit hazy on this particular day, but it was obvious that on a clear day one would be able to see quite a lot of Israel from this spot.

Really? I was at Mt. Nebo? My thoughts ran along the lines of: “Someone wake me up, I have seriously got to be dreaming.” I don’t have adequate words to describe the experience of walking through the bible on my own two feet. So grateful that I got the chance to be there. 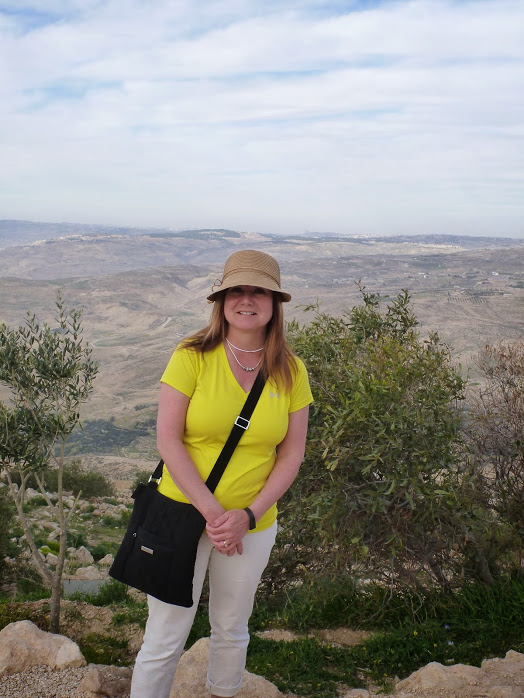 Our final stop before heading to our hotel on the Dead Sea was in the town of Madaba, Jordan. Specifically, we were going to visit the famous Madaba Mosaic Map, at the St. George Greek Orthodox Church.

The modern day St. George – built in the late 1800’s – was constructed on the site of the original Byzantine era church, which dated to the 6th century AD. During construction of the new church in the 1880’s, an amazing mosaic was uncovered. The “Madaba Mosaic Map” depicts the Middle East, and portions of it contain the oldest cartographic rendering of the Holy Land.

Our Jordanian guide gave us an overview of the map before we actually went inside to see it. 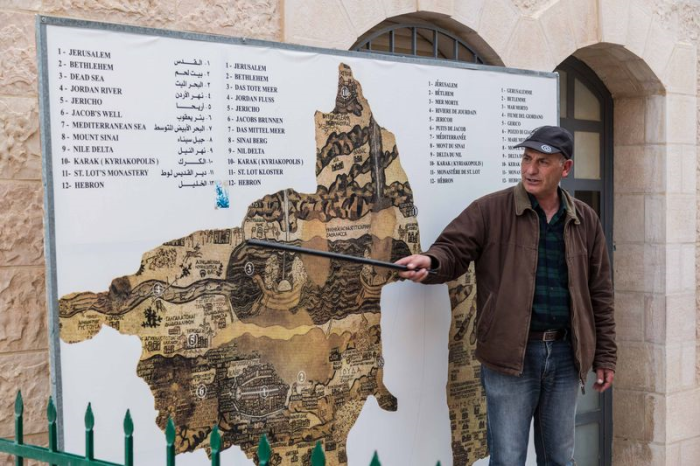 Our pastor added a few comments…

Originally measuring roughly 70′ x 23′, in it’s current condition the map covers about 52′ x 16′ of the church floor. Scholars believe that it was constructed somewhere around 550 AD. Even in it’s current state, with large sections missing, it was still quite beautiful. I was amazed to be looking at something so old, and was impressed that portions of it had survived for so long.

The other pieces of artwork at St. George were pretty amazing as well.

After leaving Madaba we wound our way down, down, down to the Dead Sea, where we were staying for the next two nights. It happened to be sunset, and the scenery was spectacular, in a barren sort of way. The photos aren’t exactly the clearest, since I was taking them through our bus window, but perhaps you can get an idea. As we moved closer to the Sea we came across camps of Bedouins. Through a tent at one camp, we could clearly see a big screen TV light up the twilight. I felt as if I were driving through a National Geographic magazine, if that makes any sense at all. We arrived at our hotel slightly dizzy from winding ever-downward. The hotel was very modern, and quite a stark contrast to the landscape and the Bedouins that we had encountered on the road from Madaba. We were all exhausted, but there was no time for relaxing; tomorrow would be another long day. We were planning on a dip in the Dead Sea at the crack of dawn, and then a day at the fascinating area known as Petra. (Que the Indiana Jones music, please.)