Saturday, October 12th, was to be our last day of fun in Italy. The next morning we were scheduled to make our way to Milan, where we would catch our flight back to the states. We were sad to see our trip coming to an end, but determined to enjoy our last day to the fullest. The day was mostly sunny and crisp, and we could see from looking out over our patio that it was going to be gorgeous. 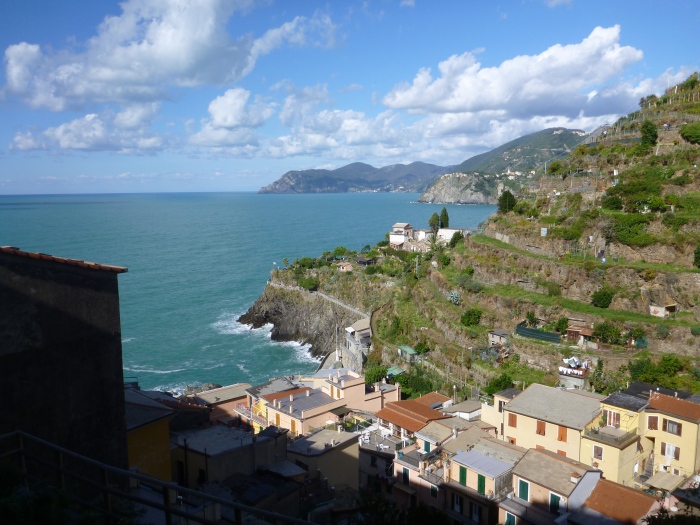 We were becoming pros at the Cinque Terre train system by now, and our plans for the day were to enjoy the two westernmost villages, Vernazza and Monterosso al Mare. I think it’s safe to say that these were our two favorite villages. They seemed to have the most activity, and were both exceptionally beautiful. We began the day in Vernazza. Oh, Vernazza… 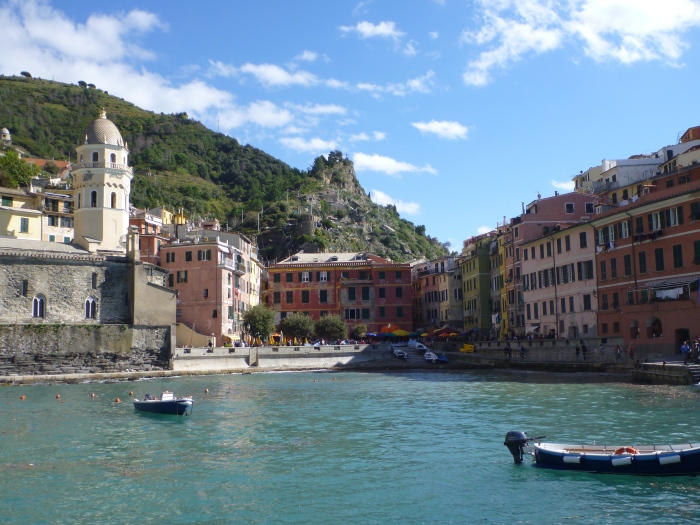 Of course we had a great lunch. I opted for the pasta with clam sauce, and Glenn got a pasta with meat sauce, and – French fries?? I guess he was getting homesick, lol. 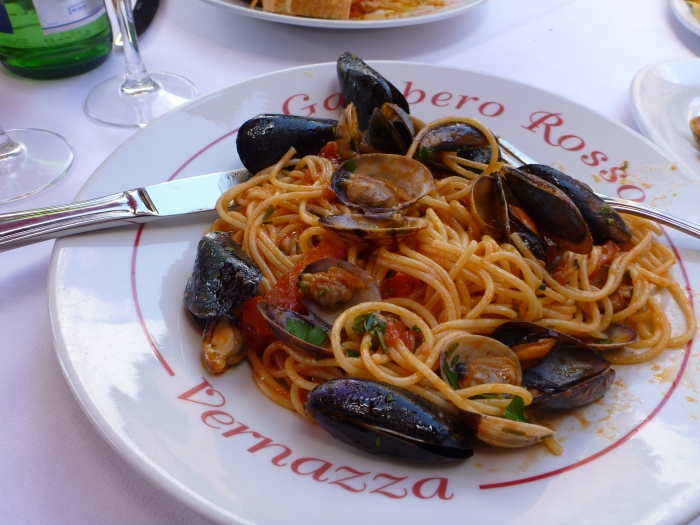 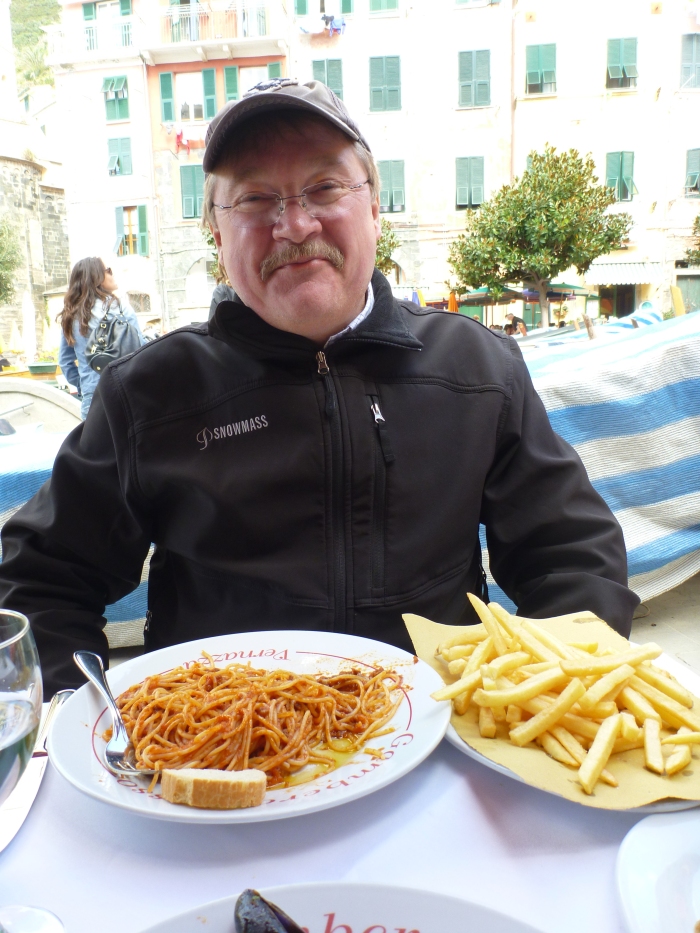 There was an ancient looking stone tower in the harbor. Glenn’s knee was bothering him at this point, but I made the climb to the top and felt that the views were worth the climb. 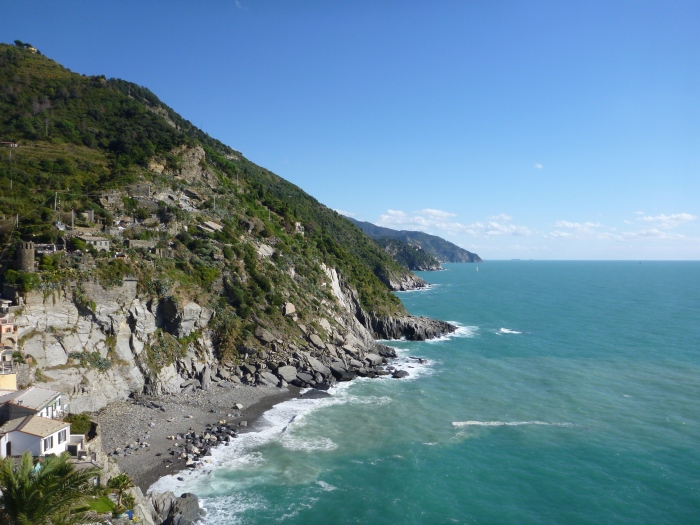 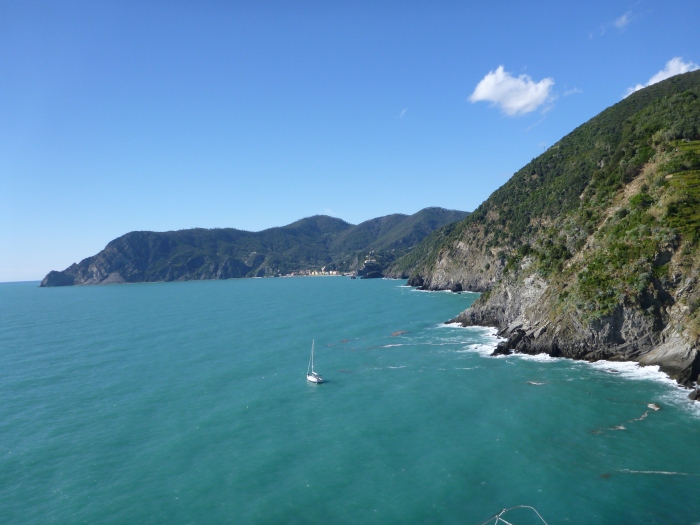 It was getting late, and if we wanted to catch the train to Monterosso we’d have to leave soon, so I climbed down and found Glenn waiting for me.

We made it to Monterosso with no trouble. I regret to say that I didn’t take many photos once we got there; all I can say is that maybe after 14 days we were just worn out. It was a lovely village though – much more cosomopolitan and bustling than any of the others. We’ve said that if we ever go back, we’d probably stay in Monterosso. There was a very nice beach there.

One of the most interesting sights there was the photo below, which literally shows the passage of time. The stone structure on the top is a medieval or Renaissance era lookout tower. Pirates were apparently always an issue, if you lived on the coast. The concrete structure towards the bottom is nothing less than a Nazi pill box. I believe the story is that there was an Axis naval yard at nearby La Spezia, and the Germans were on constant alert for an Allied attack. 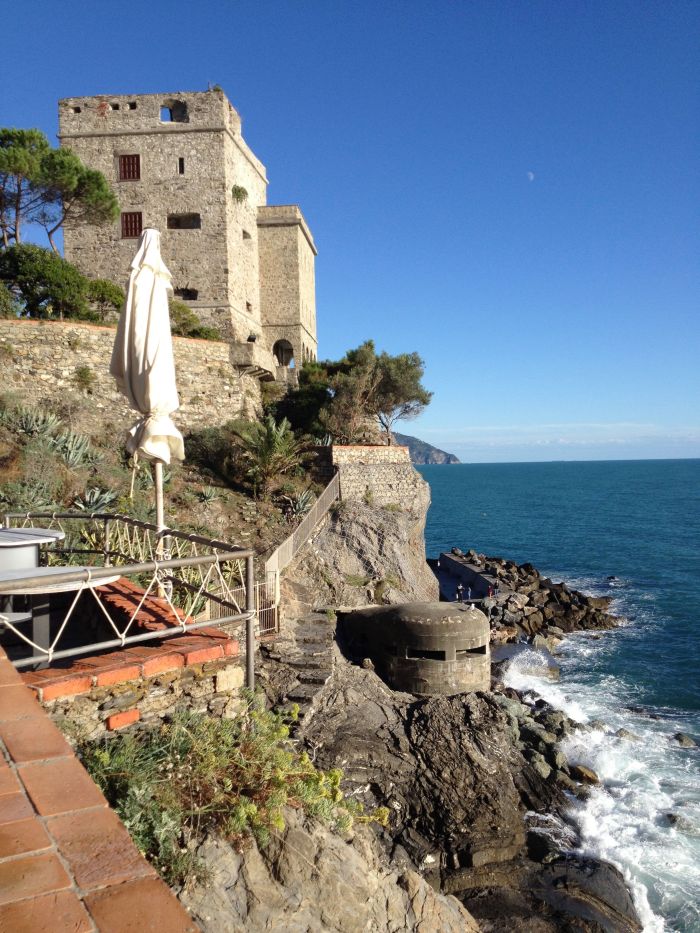 And on that note, our trip was all but over!

The next morning we had an uneventful drive from Cinque Terre to Milan. By this time we were too tired to do any more touring, and so on our last day we walked around near our hotel in search of an Italian equivalent of Wal-Mart, in order to buy another suitcase. It’s kind of funny looking back on it, after all of the fantastic food that we’d eaten in Italy, our last meal there was a slice of pizza at the shopping center food court. But I guess it’s like they say about childbirth – you don’t remember the pain, you only remember the joy. What I really remember about this trip is the amazing food, everywhere we went. The sage ravioli in Rome, the eggplant parmigiana in Florence, the Tuscan grilled meats in Siena – all of these are seared into my taste buds…And speaking of Siena, all this time later, we’re still trying – without much luck – to duplicate the potatoes that we ate at San Guiseppe’s. Someday, if we return, I will ask for the recipe.