We shook our wet shoes off, and left the small cafe where we’d waited out the rain and had some lunch. Our next stop was the church known as “San Pietro in Vincoli”, or “St. Peter in Chains”. I was interested in this site for two reasons. It was home to the relic chains that the faithful believe had bound Peter when he was held prisoner in Jerusalem, and it was also home to Michelangelo’s statue of Moses (completed in 1515). We got heavily accented directions from our waiter, and set out to find the church.

We walked for a while in what we thought was the right direction, but inadvertently had walked right past San Pietro in Vincoli and were headed for another church that certainly looked a bit more elaborate. It’s easy to see why we missed it:

Surrounded by what I think is a college campus, I never would have taken this building to be the home of an ancient relic or a Michelangelo sculpture. Actually, this church was originally built in 440 AD, so the foundations are quite old, although it’s been rebuilt many times since then, and the city seems to have grown up around it. 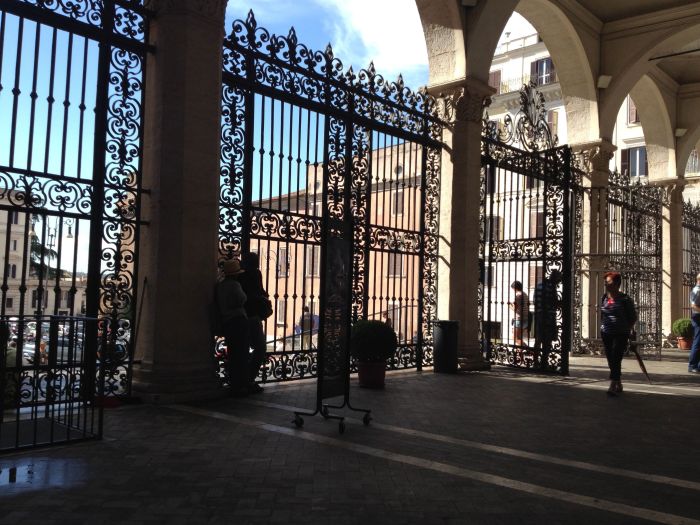 Passing through the dark, gated courtyard, we entered the basilica which, on the inside, was fairly bathed in sunlight. Looking up, we saw a fresco painted in 1706, depicting Peter and the chains. 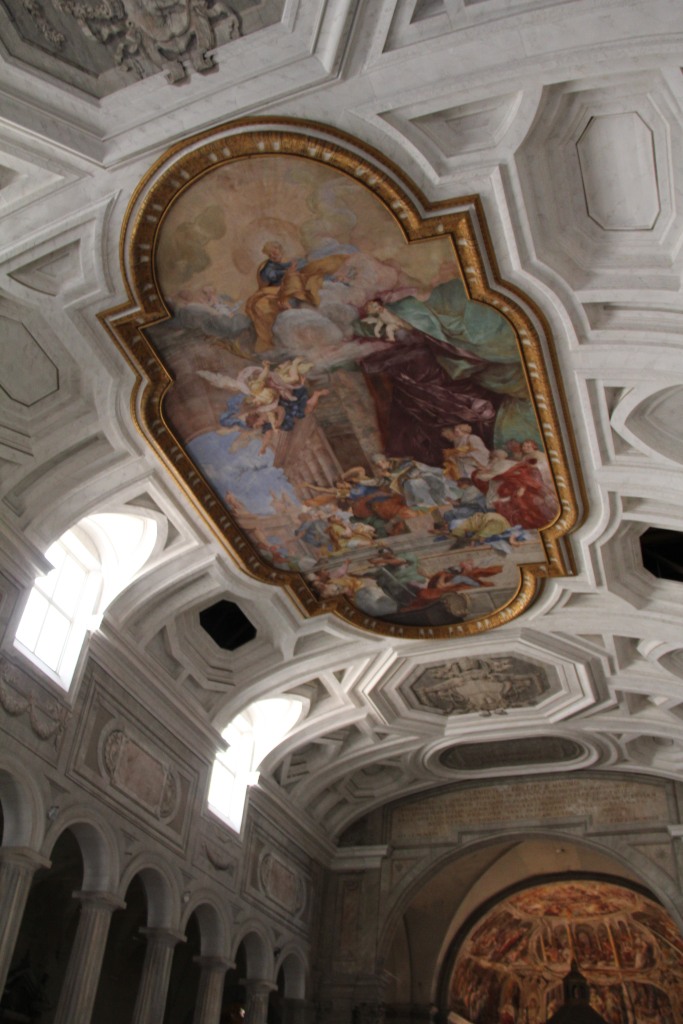 In the distance we could see the main alter, under which was the box containing the chains themselves. 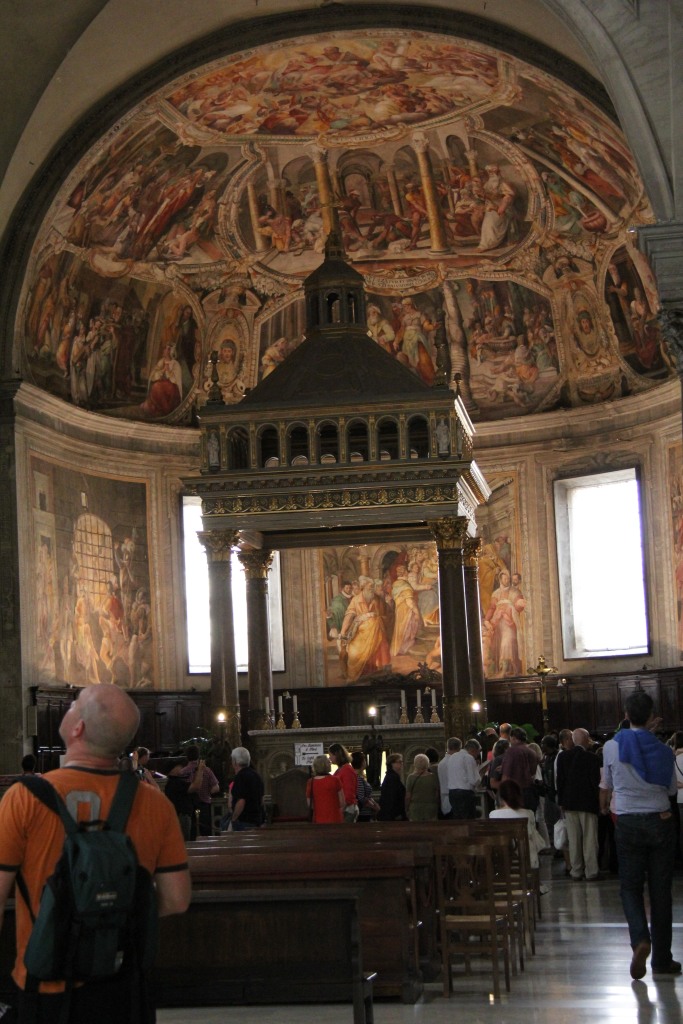 And sitting quietly off to the right, was Moses. Wow, my first Michelangelo sculpture! But wait – what’s this? He…he has…horns?? Yes. It was unmistakable. Those were horns on Moses. What could this mean? It was slightly creepy. 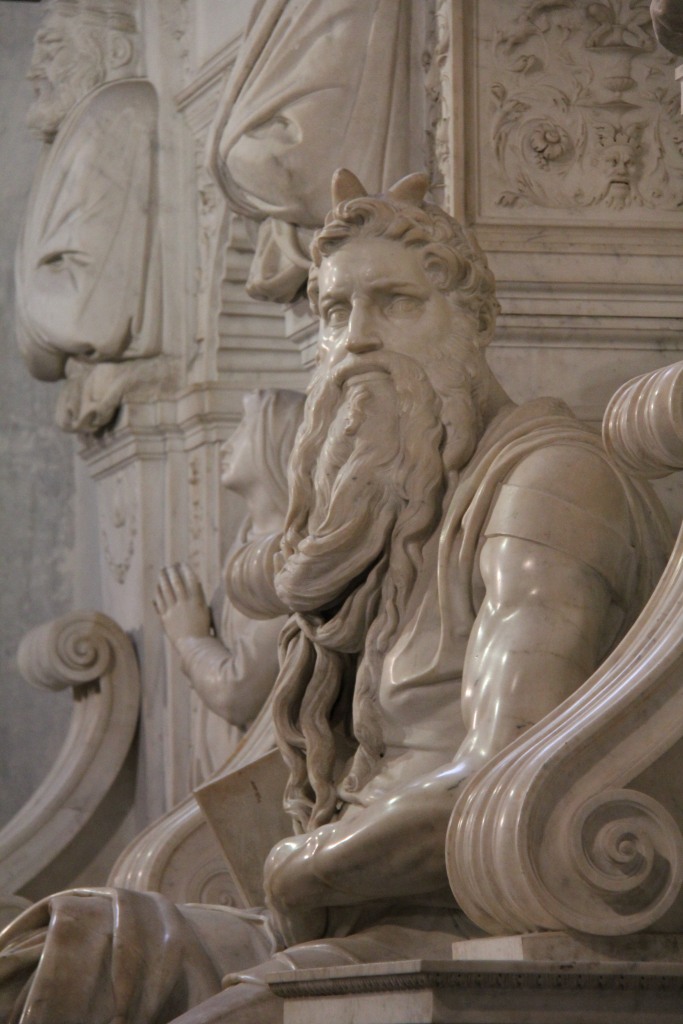 (I didn’t know it at the time, but apparently the cause of Moses’s…um…little problem…was a 16th century misunderstanding of the Hebrew word “karan“. The root of this word, “keren“, sometimes means “horn”, but is now also understood to mean “shining” or “emitting rays”. Michelangelo sculpted Moses as he had appeared after receiving the Ten Commandments, when he would have been glorified by the presence of God. I feel so much better knowing that.)

Moving quickly past the horned Moses, we turned to the alter, and the chains.

The legend goes that these were the actual chains that bound Peter when he was held prisoner in Jerusalem. The chains eventually, through a complicated history, ended up in the possession of Pope Leo I in Rome, sometime in the 440’s AD. As the story goes, when Leo compared the Jerusalem chains to the chains of Peter’s final imprisonment in the Mamertine Prison in Rome, the two chains miraculously welded together.

Whether or not you believe the story, it was still very moving just to look at the chains and to consider Peter’s life, as well as his death.