The flight over the Atlantic (leaving from Newark) was mostly uneventful, other than some pretty severe turbulence at one point during the evening. I’ve never been on a flight before where my sparkling mineral water (my drink of choice when I fly) threatened to slosh out of its little plastic cup, but on this flight it was very nearly a big mess. I was tens and little bit scared, but the flight attendants didn’t seem to be worried, so I gave one of them my cup, and tried to get some sleep.

I woke up around 6:30 to a beautiful sunrise over the Mediterranean. The lower we flew, the more cloud coverage there was, and I really couldn’t see much. I ordered a cup of coffee and poked Glenn in the arm to wake him up. His ability to sleep soundly anywhere never ceases to amaze me.

About 30 minutes later, we landed in Rome. Sure, I was tired, but I was also very excited. I had been planning this vacation for at least two years, and we were finally here. What adventures would the next two weeks hold for us?

As we made our way to the baggage level, the first thing that I noticed was the heat and humidity inside the airport. Although it was the end of September, it was still hot here, and there was apparently no air conditioning in use. I found this to be odd, considering that in Texas, there’s A/C in public buildings practically all year round, but – not for the last time – I reminded myself, “When in Rome…”, and so I removed my jacket and kept moving.

We exchanged some currency and got our bags with no issues. Heading to the ground transportation area, I scanned the crowd for a driver holding up a cardboard sign with our name on it. We found him quickly, the driver set up for us by our fabulous travel agent, Maria, from Select Italy. The short trip to our hotel was fascinating; everything was different, and well, foreign. The sights, the smells, the street signs, and the people all told us that we were very far from home indeed.

Our little boutique hotel in Rome, the Albergo Del Senato, is literally in the heart of Rome. It’s in a prime location, situated right next to the Pantheon, in Piazza della Rotonda, and is within walking distance of many of Rome’s most visited sites. Arriving so early in the morning, though, the piazza was nearly empty and was rather quiet. The Pantheon itself defies description, really. What can I possibly say about a structure that has existed in one form or another since 27 BC? My small thoughts didn’t seem to matter much. 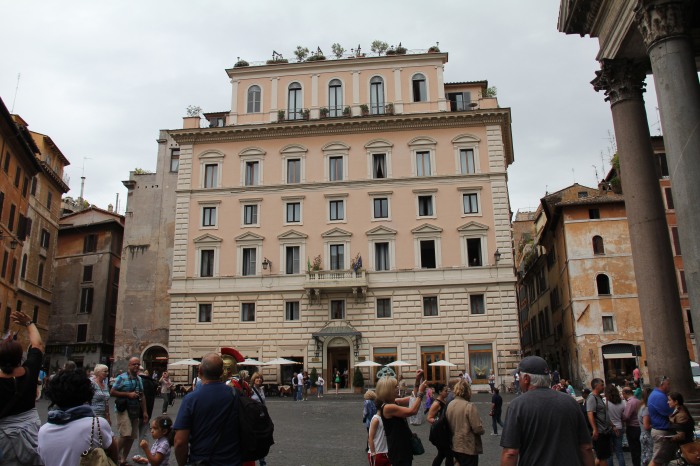 The lobby of the Albergo is very inviting, in an art deco kind of way. There were gleaming marble floors and shiny brass accents throughout. Checking in, we were told to have a seat and that it would just be a short wait until our room was ready, and happily, they were right. Within 10 minutes or so, we were being led to the second floor.

I can’t say enough about the fantastic rooms that Select Italy picked out for us on our Italian vacation. At each hotel, we were wowed and amazed by the unique rooms and the amazing views. Walking in this first room, we were somewhat stunned into silence for a moment by the incredible location of the room. Here we were, overlooking Piazza Rotonda, with a 2,000 year old structure right outside of our windows. Humbling would be a good word. Our view from the room: 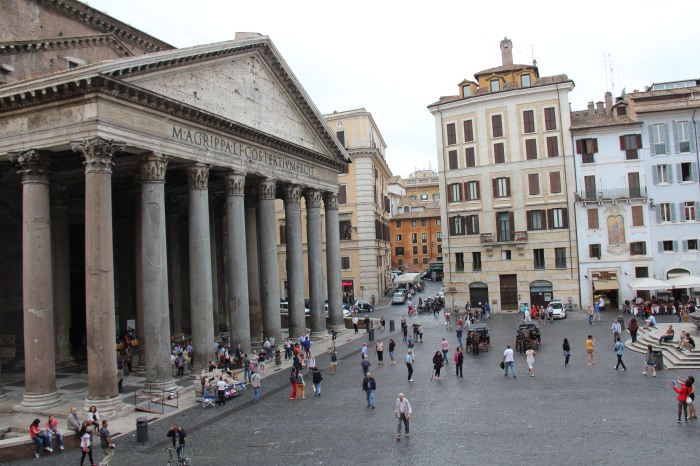 We quickly freshened up and then headed out to explore our surroundings. One of the aspects of Rome that we loved the best was the fact that you could set off in any direction from our central location, and wander at will from piazza to piazza, soaking in the sights, sounds, and smells.  For this first foray, we bypassed the Pantheon, which by this time was a little crowded, and headed west to Piazza Navona.

We stopped in at a small deli, and were amazed at the variety of pastas that they had. 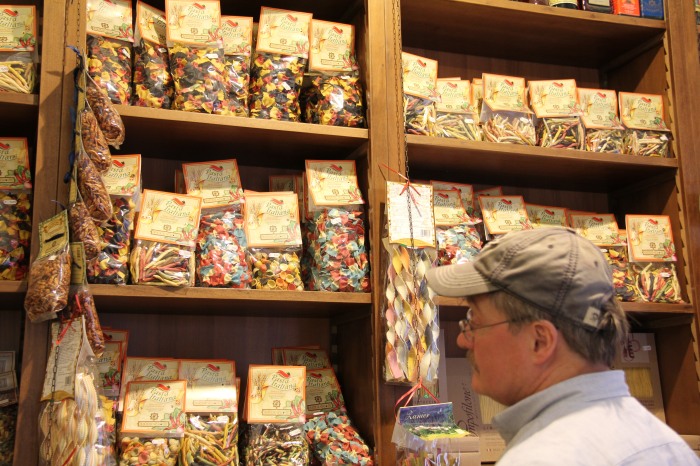 Piazza Navona is a charming area that is – like everything else in Rome – steeped in history. According to Wikipedia:

Piazza Navona is a city square in Rome, Italy. It is built on the site of the Stadium of Domitian, built in 1st century AD, and follows the form of the open space of the stadium. The ancient Romans came there to watch the agones (“games”), and hence it was known as “Circus Agonalis” (“competition arena”). It is believed that over time the name changed to in avone to navone and eventually to navona.

At any rate, even without the racing chariots, we were impressed. The area was filled with street vendors selling artwork and with strolling musicians. The square is lined with colorful restaurants and gelato shops. A million sights and smells competed for our attention, but I was drawn to the Man Without a Face:

We sat at a cafe and enjoyed our first cup of Italian coffee. As we sat there, the bells at Sant’Agnese in Agone began to ring.

We saw a lot of well-known sculptures and paintings while we were in Italy, and we got our first taste of that here at Piazza Navona, which is home to the famous “Fontana dei Quattro Fiumi” aka the Fountain of the Four Rivers, designed by Bernini in 1651. Admittedly, it was pretty impressive. Who needs to look for DaVinci codes? This stuff is pretty cool all by itself. 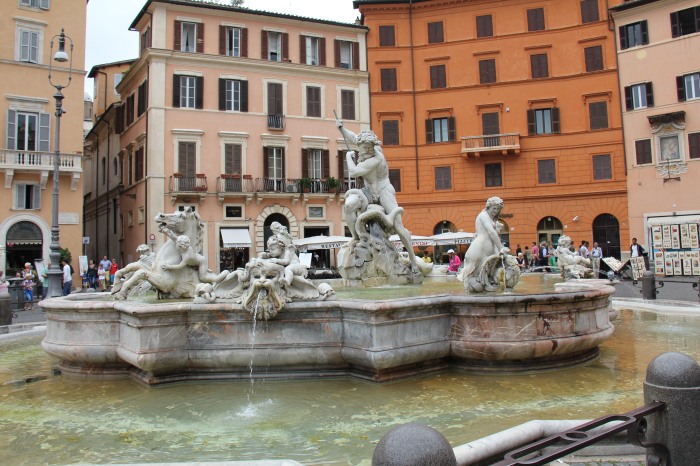 Eventually we strolled back to “our” piazza, and looked for a spot to have a late lunch. Out of the many restaurants lining the piazza, we chose the “Ristorante Di Rienzo”, which was right next to the Pantheon, directly across from our hotel. Sipping on a glass of wine, sitting in front of the Pantheon…all I could do was sit quietly and soak it all in. Of course, we weren’t overwhelmed to the point of starvation. Glenn ordered a pizza, and I ordered ravioli with a sage butter sauce. Both were delicious. 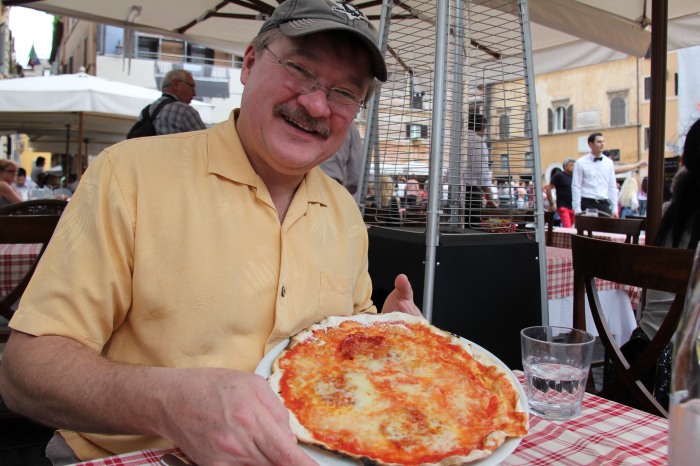 At some point during the meal I ventured to ask our waiter what the inscription was on the front of the Pantheon. Waiters in Italy are not known for the being the most polite, and ours lived up to this stereotype, brusquely telling me that he didn’t know. Granted, I probably should have made some attempt at speaking Italian, but I didn’t. Looking it up myself, I learned that the inscription actually roughly translates into “Marcus Agrippa, son of Lucius, when consul for the 3rd time, made this”. I considered informing the waiter of this, but somehow I think he knew. 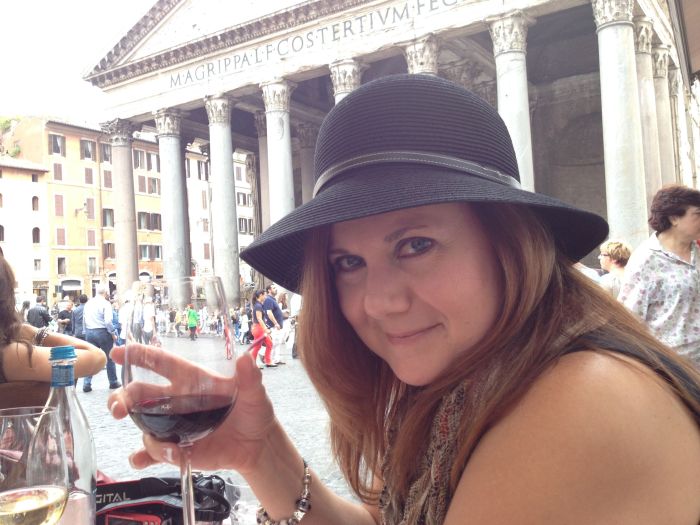 After lunch we resumed our strolling, until we were too worn to stroll anymore. We found a good spot to people watch and sat back with glasses of wine.

We got to know both of these very talented musicians over the next few days: 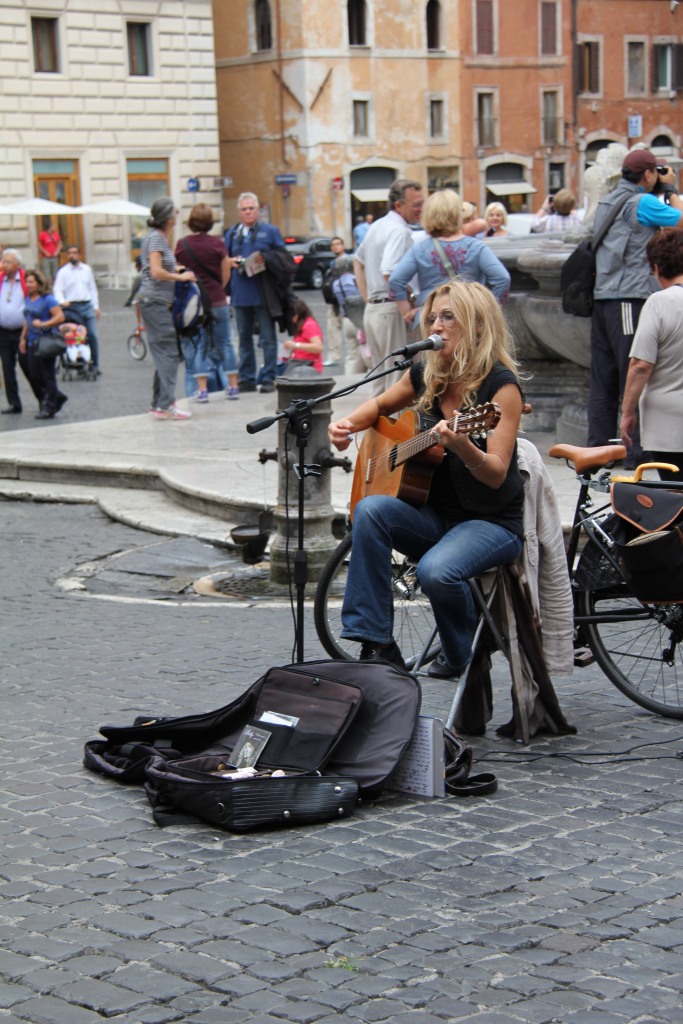 Piazza Rotonda after dark is a magical place, and it seems to come alive with what I think of as “Lady and the Tramp Romance”. The accordian players, the candlelit cafe tables with their red-checkered tablecloths, and the couples walking hand in hand just made me want to smootch with Glenn over a plat of spaghetti.

Soon after dark we called it a night. Our first day had been a long one, and we had a 9:40 AM guided tour of the Colosseum awaiting us in the morning. I went to sleep with shouts of “MAXIMUS!! MAXIMUS!!!” ringing in my ears, and the sounds of the piazza below drifting in through the open window.