We rose early on the morning of Saturday, June 7th, in time for breakfast at our hotel. We were beginning to get an idea of what a “traditional” Scottish breakfast was all about. Most places usually served a first course of porridge. Yes, oatmeal, but not the Quaker Instant variety. Scottish porridge is delicious; very hearty and filling, and the perfect way to get energy for a day of sightseeing. The porridge was typically followed by a plate full of eggs, sausages, bacon, tomatoes and mushrooms. At the Tigh-na-Sgiath, they also offered lightly fried patties of haggis and black pudding. I tried the haggis, but decided to pass on the black pudding.

After breakfast we packed our car, and took a few minutes to get better acquainted with Hamish, of the two kitties that lived on the grounds. Glenn was smitten with him.

(Hamish had a little Adolf Hitler mustache, if you look closely you can see it:)

Our ultimate destination for this day was Castle Stuart, just outside of Inverness, but first we were headed to the Glenfiddich Distillery. This particular area of Scotland is famed for its many single malt whisky distilleries. Fans of Scotch Whisky can follow the “malt whisky trail” if they are so inclined, and tour the various distilleries; the highlight, of course, being the free sample that is usually offered up at the end of the tour.

The Glenfiddich Distillery was actually a pretty interesting place to visit. Being something of a single malt fan, myself, I was curious about the process. So were a lot of other people; the parking lot was filled with tour buses. We were walked through the process by our tour guide, ending up in a storage building filled with casks that were marked with the various dates that they were put up. We learned about the differences between the port barrels and the sherry barrels, and learned about the “angel’s share”, this being the small percentage of whisky that evaporates over the 15 year storage period. These Scots take their whisky seriously, involving angels in the deal, and all.

We left the distillery and decided to take a slightly different route up to Inverness, rather than back-tracking the same way that we had come. This route took us north and then west, passing through Elgin and Nairn before reaching Inverness. We stopped at the local equivalent to Wal-Mart, a superstore called “Tesco”. We were looking for an overnight bag to take with us to Castle Stuart. The castle has steep spiral staircases, and we were forewarned that large suitcases would not be manageable there. We found a sturdy bag for £7, and got out of there, not being big fans of superstores under any circumstances.

(It was at the roundabout at the Inverness Tesco that we received our first less than friendly hand gesture. Our pride was stung, but we sucked it up and moved on.)

The castle was only a few minutes outside of Inverness. We rang the bell at the gate, and announced ourselves. The gates swung open and we drove up the tree lined path to the castle courtyard.

Castle Stuart was one of the highlights of our trip. It’s an amazing place, in an amazing location, being situated a stone’s throw from both the Clava Cairns and Drumossie Moor, site of the Culloden battlefield. The castle has quite a history too. Here’s an excerpt from the castle’s website:

When Mary Queen of Scots came back to Scotland in 1561, after the death of her husband, the Dauphin of France, she gave this land to her half-brother, James Stuart, granted him the title ‘Earl of Moray’ and he ruled Scotland as Regent for her. Unfortunately he was murdered and the 2nd Earl of Moray was also murdered – stabbed to death 13 times. Thus Castle Stuart was finally completed in 1625 by James Stuart, 3rd Earl of Moray.

He married Anne Gordon – it was her father, the Earl of Huntly – who stabbed to death his father, the 2nd Earl of Moray. We think he built the castle for protection from his in-laws.

No sooner was the castle built than it was attacked by 500 MacIntoshes who came down the drive and took over the castle. The Stuart family decided the best thing to do would be to pay off the MacIntoshes – they took the money and ran.

Some 20 years later, with the power of Oliver Cromwell in England gaining strength, the cultured and melancholy Stuart king, Charles the First, died beneath the headsman’s axe outside his own London Palace of Whitehall. Castle Stuart suffered, fell into decline and gradually became a derelict ruin for almost 300 years. It remained empty – except for the ghosts.

The castle stood in ruins for almost 300 years, until a Charles Stuart from Canada, and his wife Elizabeth, embarked on the home improvement project of a lifetime and decided to restore it. We were greeted by the Stuart’s daughter Caroline, who was the ultimate hostess. She gave us a brief tour of the castle and showed us to our room, the “Murray Room”…which also happened to be the haunted bedroom. More on that later. We found that they weren’t joking when they warned us about the spiral staircases. These were so steep and narrow that it required all of my concentration to not stumble and fall. 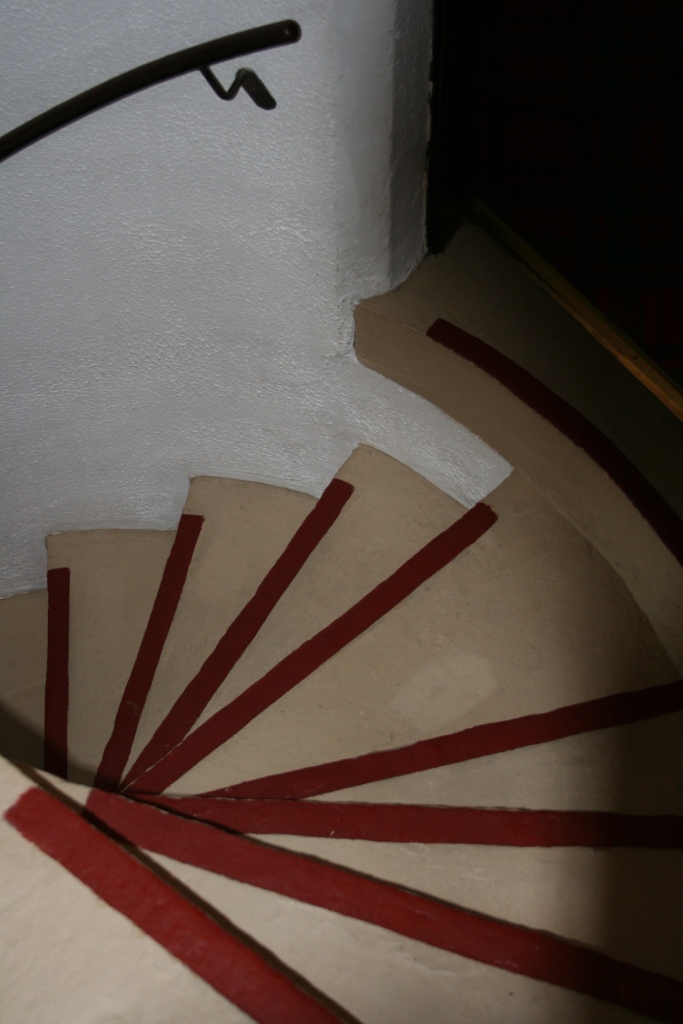 The Murray Room, in my humble opinion, was the best room in the castle, but I have to admit I didn’t get to see all of the bedrooms. Each of the bedrooms at Castle Stuart are decorated with the clan colors of the clans who fought on the front lines of the battle of Culloden. The Murray room was decorated in hues of light blue. It was surrounded on all four corners by little turret rooms; four circular rooms off of the main bedroom. They were each furnished with window seats, and one of them had a dressing table with a looking glass. Yes, I felt like a princess here. Even the usual “chocolate on the pillow” was special here; we received a chocolate sculpture of the Loch Ness monster!

Stuart Castle was like a livable museum. It had been restored with antique furnishings that called to mind the glory days of the Jacobites, with paintings and artwork that recalled Scotland’s gallant past. We were in awe of everything that we saw there. To make things even better, there was only one other couple staying in the castle that night, so we could pretty much wander around at will, and not bother anyone. We had the drawing room and the billiard room at our disposal. 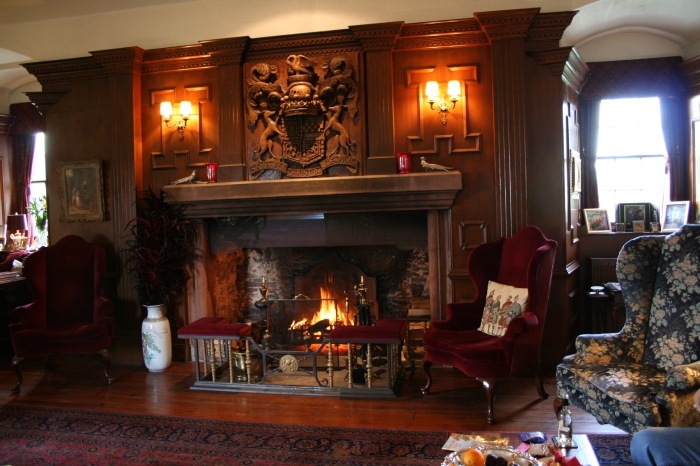 The drawing room was well stocked with snacks and beverages, and the room was filled with books. It was the perfect place to relax before dinner, but, not wanting to waste any time, we put on our walking shoes and tackled the spiral stairs, heading down to the castle grounds. There was a beautiful garden next to the castle, and a nearby field that was filled with rabbits. Unfortunately I became acquainted with nettles here. We strolled around and took pictures for about an hour, and then went back to the castle to dress for dinner.

Dinner at Castle Stuart was quite an occasion. We were called to dinner by a bagpiper, which came pretty close to making me cry. There was something about hearing the pipes, this close to Culloden, surrounded by Jacobite memorabilia, which leant magic to the moment. I could only close my eyes in answer to the call, and let the magic wash over me. I don’t know if anyone reading this has ever been in the presence of the pipes in close quarters; the sound literally resonates through your blood and bones. It’s easy to see at a time like this, why the English outlawed the pipes as a weapon of war; at the very least, a couple of hundred years after Culloden, they are still inspirational.

The dinner itself was (of course) wonderful, as all of meals in Scotland had been up to that point. I can’t remember exactly what was on the menu now (a month later), but I’m pretty sure that I had the fish, and Glenn had the beef. The most memorable part of the experience was the dessert, which was a clever pastry fashioned in the shape of, who else, Nessie. Caroline laughed at us when we pulled our cameras out to take pictures of pastry, but she obliged us by taking our picture anyway.

(It’s okay to bite the hand that’s about to eat you, right?)

After dinner we relaxed in the drawing room for a bit, and then went back up to the Murray Room. We sipped wine in front of the fireplace, and Glenn asked me to read aloud from a book that we had found in our room, which was nothing but ghost stories about the castle.

This proved to be a bad idea, considering the fact that the resident ghosts seemed to favor the Murray Room. I am not usually the superstitious type, but hey, this was Scotland, and anything could happen. We were pretty close to the standing stones of the Clava Cairns, after all, and the magic of the pipes was still in the air.

The main point here is that, somewhere around midnight, I was too scared to get up and go to the bathroom. Now, lest you think me a hopeless coward, you should realize that in order for me to get to the bathroom, I would have had to leave our bedroom, walk up a short flight of stone steps, which lead to a short, darkly paneled corridor, and finally, to the bathroom. Yes, yes, the way was lit, but after reading the book of ghost stories I just couldn’t make myself do it.

(The bathroom stairs, which seemed MUCH worse at midnight, after reading ghost stories:) 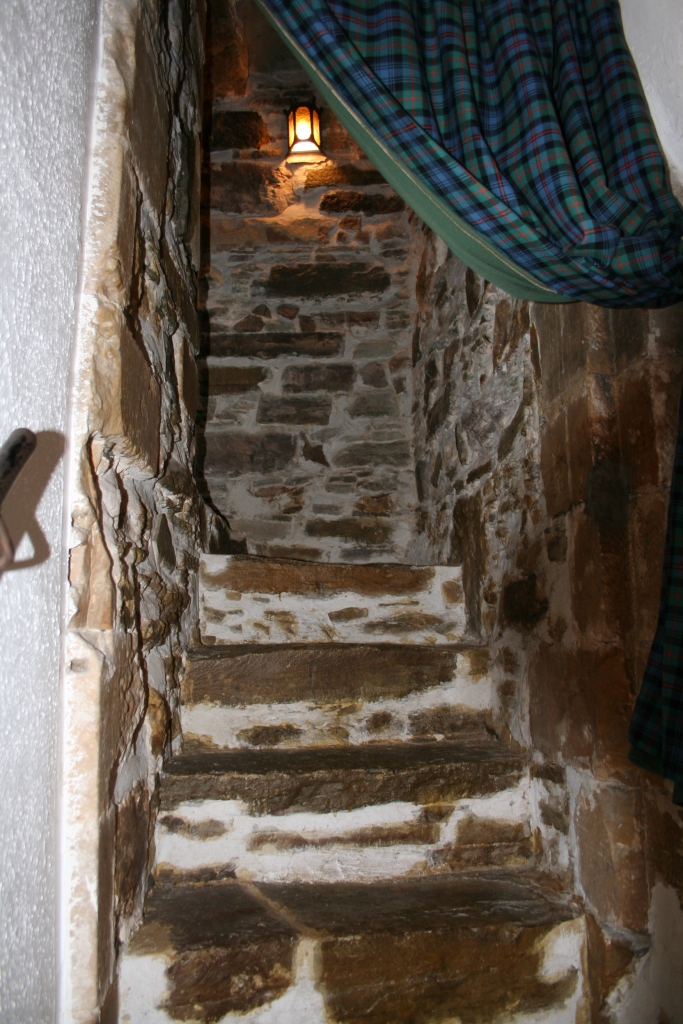 Happily, I survived until morning. Day 5 was behind us! 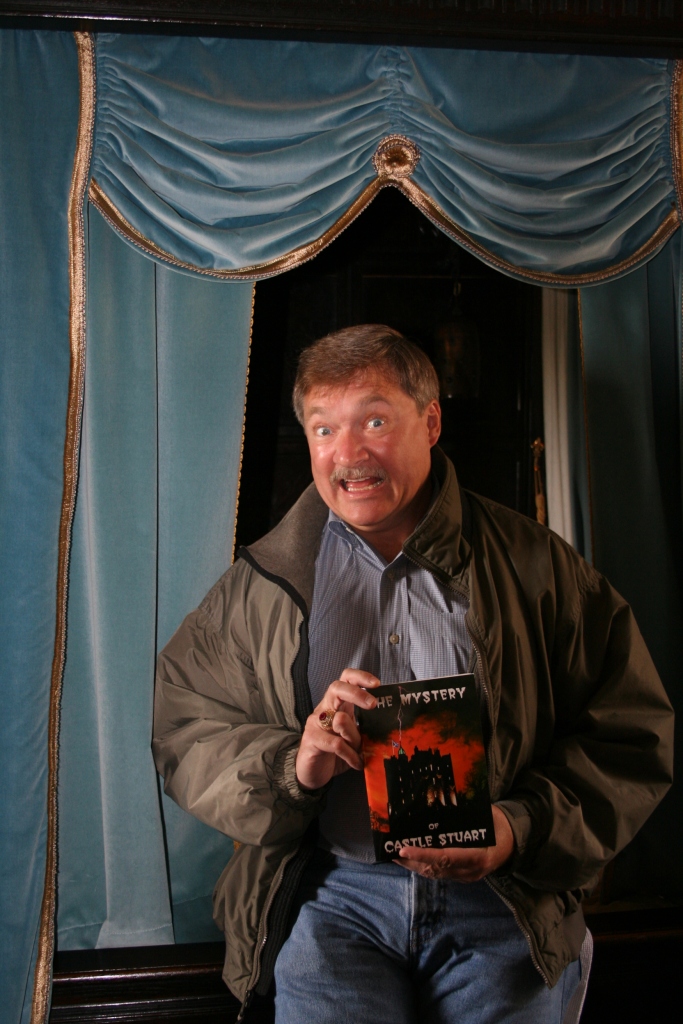